NATO Summit in Brussels: Armament and war but also „we will not be silent!“ 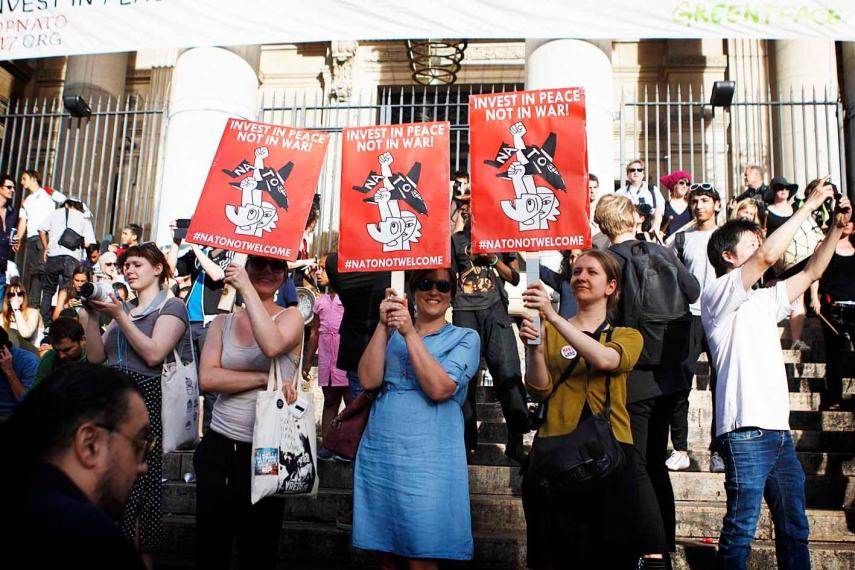 Foto: Vrede vzw
NATO Summit in Brussels: Armament and war but also „we will not be silent!“
Article
16/06/2017 - Reiner Braun, Kristine Karch and Lucas Wirl
4 minutes

At the NATO Summit in Brussels US President Trump wants to collect imaginary debts and the European heads of state reiterate their willingness to spend 2% of GDP on armament.

A large wave of armament is coming, for Germany 2% military spending means an increase from 37 billion Euro to 69 billion Euro, for Europe an increase of 200 billion to more than 300 billion Euro. The Europe of crisis and joblessness should pay for preposterous interventions and wars while the military industry rejoices. And there will be cuts in education, science, health care and environment.

The Summit agreed on NATO’s participation in the so called “war on IS”. In reality this “war on IS” is a series of illegal wars in which Germany now will participate more actively than before. This so called “war on IS” brings terror to a whole region and therefore is provoking terroristic acts. An even more brutal war of bombs will follow with NATO’s decision. The majority of the victims are the innocent. Each innocent death strengthens IS and allied “groups of terrorists”. The war in and for Syria will be increased turning the whole region into an even more difficult to control tinderbox. The continuous war on terror will also fail because wars do not solve problems but solely increase them by destabilizing whole societies, countries and regions.

The “3 Cs” of the summit – cash, capabilities, contributions – can be easily translated into more money for modern weapons and for more wars worldwide.

But Brussels was more than a city of the active and cold warriors.

More than 12,000 protesters were marching through Brussels in a colorful, young, broad, impressive and loud demonstration on 24 May. For many hours a trail of peace was moving through the city of Brussels. The actions were creative, musical and international. Many countries with many slogans – an impressive atmosphere. Everywhere “no to NATO” was echoing through the streets. The common demeanor for peace activists, critics of globalization, gender activists, and environmentalists was a clear “no” to further armament. This demand forged a broad coalition of resistance with diverse political backgrounds.

More than 200 people attended to counter summit of the Belgian and international peace movement on 25 May. It was characterized by its internationalism and by discussions on challenges to peace. In an atmosphere of solidarity and mutual tolerance several common points became obvious:

NATO wants to “effectively evaluate” its Brussels decisions of armament and war. We will annualy answer with a evalutation for peace highlighting the peaceful alternatives to this politics.

In conclusion, a strict “No to NATO” and a continuous delegitimation of NATO is necessary. Aim has to be the overcoming of NATO. NATO and global peace are not compatible. Peaceful cooperation is needed. These main positions of the international network No to War – No to NATO were broadly agreed upon.

This will only become reality with a broad, manifold and diverse but also commonly active and mobilizing international peace movement.

To make peace great again was the “homework” some participants of the counter summit felt like taking back home with them.

The optimistic atmosphere of the protests and the counter summit encourage to reach this great aim. The next actions, among others at the G-20 summit in Hamburg or the protests at Air Base Ramstein will be a next gauge – not just for Germany.