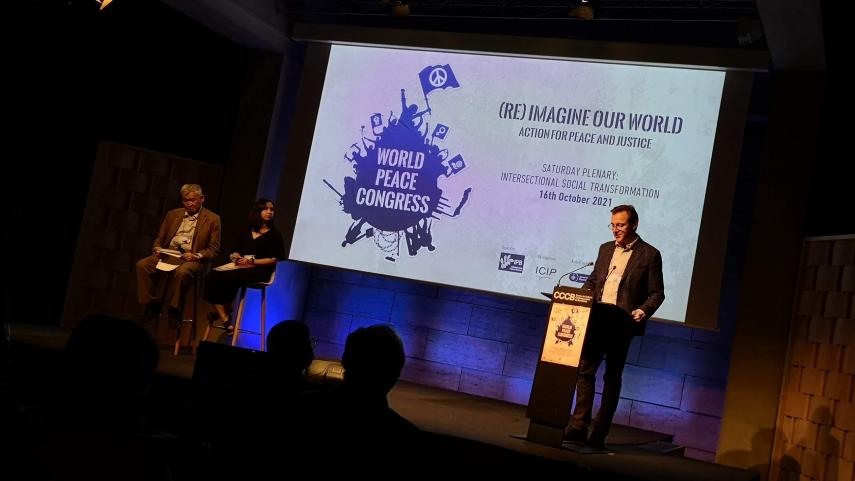 Next year we mark the 40 years anniversary of the Report of the Independent Commission on Disarmament and Security Issues under the Chairmanship of Olof Palme. The following text is a speech by Alexey Gromyko at the International Peace Conference in Barcelona, October 15-17.

Earlier this year I was honoured to be invited and become a member of the High-Level Advisory Commission for Common Security 2022. The Commission is a part of a project launched by the Olof Palme International Centre, the International Trade Union, and the International Peace Bureau with the support of SIPRI. I am grateful to Reiner Brown and Anna Sundstrom for involving me in this cooperation.

Next year we mark the 40 years anniversary of the Report of the Independent Commission on Disarmament and Security Issues under the Chairmanship of Olof Palme. The Report introduced the concept of Common Security and contributed to the end of the Cold War. However, these days the ideas behind Common Security are almost forgotten in spite of the fact that we again live in extremely perilous times.

The pandemic has affected each and every significant aspect of life – global health, global economics and politics, humanitarian and social issues. The pandemic, with all its human drama and tragedy, could and should have brought the world together. Instead political divisions have become only deeper.

The relative levels of poverty and social inequalities across the planet were going up before the pandemic. Covid has enhanced these negative trends. 1% of the world population owns more than 80% of global wealth. The global debt today is about 250 trillion USD (this is 322% of the world GDP). The Euro-Atlantic area has a debt to GDP ratio of 380%; China — 310%. Russia is luckier - its national debt is less than 21% of the GDP.

The neoliberal model, originating from Reaganomics and Thatcherism, still dominates the world. Today there are few countries, which can boast of welfare state and social contract, of a system, when social rights of a human being are protected from cradle to grave. In better days the concepts of the Third Way, a stakeholder society, communitarianism and others were put forward. Amitai Etzioni and John Galbraith, Robert Putnam and David Marquand, Will Hutton and John Plender, Jeremy Corbin and many others made important contributions to these efforts. Yesterday Jeremy Corbin delivered one more passionate speech for the sake of social justice, peace and disarmament.

In spite of Great Recession, neoliberalism continues to dominate the international economy. The global financial oligarchy continues to rule the world. Even the middle class has suffered a lot, which resulted in the rise of New Populism. To offer just one telling examples: while in the 1960s the CEO of a major US company would be paid, on the average, 20 times the wages of a regular employee, today the ratio is roughly 300:1.

Competition between the leading centres of power in the world accelerates and intensifies. The parties resort to political, economic, ideological, military and information instruments of domination and coercion. Even the work on COVID vaccines has exacerbated tensions between states.

Differences between the United States and China is becoming one of the fundamental elements in this competition. Some experts believe that confrontation between the US and China will result in a new edition of bipolarity. Others maintain that the rivalry between the world’s two leading economies is a bilateral conflict and cannot evolve into a bipolar world order similar to that of the Cold War. In any case, US – China military tensions are a major risk. These tensions are a time bomb. There is a real risk of a dangerous escalation over Taiwan.

International mechanisms are working less and less effectively. Instead, nations tend to rely on regional projects, regional cooperation, localisation. We observe not only strategic decoupling between the United States and its European allies. In addition, Washington now wants to decouple itself economically and technology from China. Multilateral institutions are stagnant or in crisis. Having just marked 75 years since its creation, the United Nations, this universally recognised organisation, is struggling with all the negative effects of confrontation among its members.

The entire architecture of international security is almost destroyed. Environmental issues and climate change deserve massive attention and action. But the threats of militarisation, a new arms race, risks of an unintentional military conflict between nuclear powers are disproportionately neglected. Many expectations, connected to the end of the Cold War, were dashed. The bitter fact is that the world since then has not become a safer place. Some people say that now it is a more dangerous place than in the 70s and 80s. Russia experienced the first external shock in the 90s, when NATO took a decision to expand. The second shock came with the bombing of Yugoslavia in 1999. The third shock was the invasion of Iraq in 2003.

Still there is hope. The United Nations have survived. The climate change and green agenda are reverberating across the Planet. There are more and more people realising that arms control and disarmament are not less important. Let me say that perhaps it is more important because it deals with immediate existential threats.

Today, in 2021, this is so important to look around and to think about what big ideas can come to the help. One of them is the concept of Common Security. Initially it were elaborated in the Olof Palme Commission Report back in 1982. Nowadays the task is to preserve the essence of the Palme commission Report on Common Security and to build upon it. The core of its philosophy should be kept intact while a range of recommendations should be modernised to carry forward the Commission’s mission.

Common Security is a comprehensive phenomenon which embraces in equal manner the spheres of economy, social life and security as such. Security should be treated as equal and indivisible common good. Security at the expanse of others is not achievable. Common security is one of the most important strategies, responsible for the well-being of humankind. The basis of Common Security rests on the fundamental right to life. Therefore it should be treated as a responsibility not a privilege of governments to act in the interests of Common Security.

International and interstate relations will never be free from competition and even rivalry. Therefor Common Security should be underpinned by strong and viable international mechanisms, in the centre of which should stay the United Nations. Any enforcement in international relations, including military enforcement, should be strictly guided by the VII Chapter of the UN Charter. Goodwill and confidence-building measures are indispensable elements of Common Security.

Arms control and policy of disarmament are crucial components of Common Security Therefore a robust support should be given to the Gorbachev - Reagan statement of 1985 and the Putin-Biden statement of 2021 that a nuclear war cannot be won and should never be fought. To fight a nuclear war is suicidal and just crazy. One day Nuclear deterrence should be replaced by the concept of Common Security.

The politics of nuclear deterrence will last for quite a while. Nevertheless, Common Security to a large extent can be achieved already at the age of nuclear deterrence. The concept and practice of Common Security will play a substantial role in phasing out the policy of nuclear deterrence. Meanwhile the extension of New Start Treaty for 5 years as well as negotiations of all P5 states on the future of strategic stability should be fully supported AS should be fully supported a multilateral and verifiable moratorium on the deployment of Intermediate Nuclear Forces in Europe.

Besides, Common Security means enhancing stability by increasing transparency, avoiding dangerous military activities, and providing dedicated political and mil-to-mil communication channels that would avoid escalation of incidents that might occur.

All nations should exert their efforts to achieve ratification of Comprehensive Test Ban Treaty and to make it judicially enforceable. The development and deployment of weapons in outer space or weapons directed against objects in outer space should be prohibited. The Non-Proliferation Treaty is further jeopardised by the intention of the US and the UK to transfer nuclear technologies to Australia for military purposes.

My grandfather, Andrey Gromyko, was telling us, children and youngsters, 40 years ago: “When I was negotiating, my brothers, killed in the WW2, whispered in my ears — “Andrey, don’t give away what we died for”. And millions of other Russians who survived the war, could tell the same.

I do not know, how many people these days know that Andrey Gromyko was a sincere supporter of abolition of nuclear weapons. And he was a true supporter of the United Nations, which he helped so much to design and launch. His farther of fought in two wars — in the Russia-Japanese war and then in the WW1. The grandmother of my wife as a girl say how her mother was killed by fascists. And millions of other people in Russia experienced similar horrors.

My farther was an active member of the famous Pugwash movement and of Dartmouth meetings. For many years he stood as a scientist for the abolition of apartheid in South Africa. And there were hundreds and thousands in the Soviet Union like him.

Russia was destroyed in 1917, it barely survived in 1941, and then again it collapsed in 1991. Why I am recalling all this? Because I want to say that Russia has suffered a lot in the 20th century. And we have exceeded all quotas for wars, revolutions and counter-revolutions.

In new times Russia is routinely accused of all possible and impossible sins. Russia is a complicated country. But it was Russia, which urged the US not to abandon the ABM Treaty in 2002, it urged NATO to ratify the Conventional Forces in Europe Treaty, again it urged the US not to leave the Intermediate Nuclear Forces in Europe Treaty in 2018 and recently it urged them not to abandon the Open Skies Treaty.

Russian scientists continue to exert efforts to re-establish arms control agenda and to stop brinkmanship in Europe. For more than a year now the Institute of Europe and the Institute for the US and Canadian Studies of the Russian Academy of Sciences have been working with the European Leadership Network and many other colleagues from Europe and the United States on de-escalation of relations between Russia and NATO. Last December we published a report on Military Risk Reduction in Europe. It was signed even by two former secretary-generals of NATO.

Common Security remains an indispensable condition for the salvation of humanity from extinction.