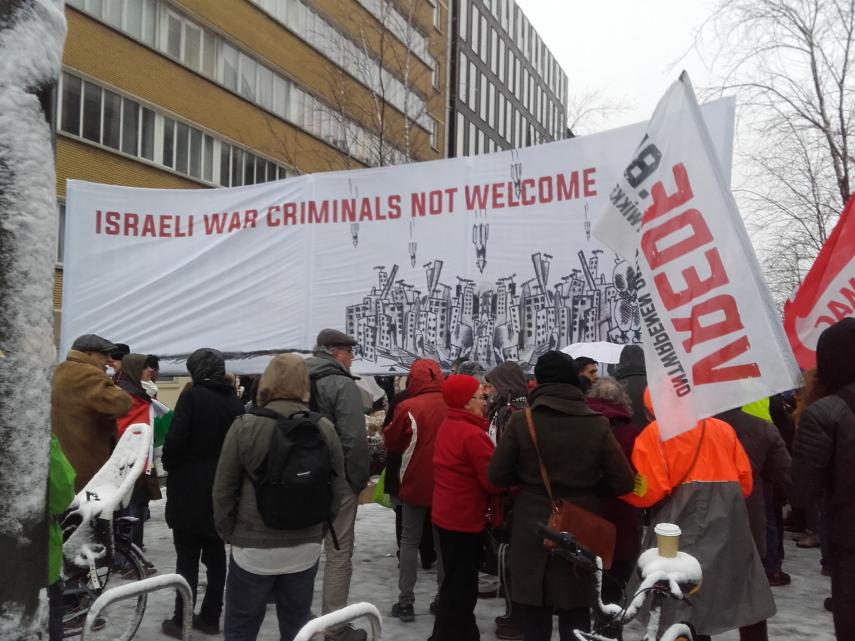 Joint open letter to the ICC prosecutor to open an investigation into the situation in Palestine. Vrede vzw co-signed the letter

Today, on 17 September 2018,  25 civil society organisations including coalitions urge you to urgently open an investigation into the Situation in Palestine. The International Criminal Court (ICC) is the only viable independent judicial body capable of ending impunity for crimes committed in the occupied Palestinian territory and effectively deterring the commission of future crimes.

Almost four years have passed since the opening of the preliminary examination into the Situation in Palestine at the ICC, following the submission of an article 12(3) declaration that allows you to hold to account individuals for the commission of alleged war crimes and crimes against humanity in the occupied Palestinian territory, including during the 2014 military offensive on the Gaza Strip when 1,600 Palestinian civilians were killed.

Since the opening of the examination, more than 550 Palestinians have been killed and tens of thousands of Palestinians have been injured by Israeli forces. Israel has indefensibly and willfully killed unarmed Palestinian protesters in increasing numbers in the context of the 2018 Great Return March demonstrations in the occupied Gaza Strip, during which Palestinians demand that their right to return to their homes be fulfilled and that the closure on the Gaza Strip be lifted. Palestinians protesting Israel’s annexation of East Jerusalem and related policies of settler transfer into the city were also killed at an alarming rate by Israeli forces in 2014-2015. Israel has also accelerated its transfer of Israeli civilians into the occupied Palestinian territory, and appropriated significant and extensive swaths of Palestinian land to pave way for the merging of settlements with Israel while dividing Palestinian families and communities. The appropriation and destruction of Palestinian property has resulted in the displacement of thousands of Palestinians since 2015. Orders given to completely destroy the Khan Al-Ahmar community will be implemented at any moment, resulting in the forcible transfer of its 180 residents.

The situation in the occupied Gaza Strip is dire due to Israel’s imposition of the unlawful closure that denies Palestinians’ freedom of movement and access to basic life-sustaining services. We are quickly approaching year 2020 which represents, according to the United Nations, the predicted moment in time when the Gaza Strip will become uninhabitable.

The situation in Palestine is rapidly deteriorating and war crimes and crimes against humanity are allegedly frequently committed to entrench Israeli control over Palestinian territory and the Palestinian people. This year marked 51 years since the beginning of Israel’s occupation of the Palestinian territory and so far it has been characterized by complete impunity. There is no domestic mechanism capable of or willing to investigate, prosecute and convict perpetrators, including high-level officials of war crimes and crimes against humanity. Neither is there a willingness to put in place such a mechanism. To the contrary, in August 2018, an Israeli court, for the first time, legitimized an Israeli settlement constructed on appropriated Palestinian land. That same month, the Israeli military investigation mechanism closed files on ‘Black Friday’ killings; over a period of 4 days, Israeli armed forces killed more than 200 Palestinian civilians in Rafah.

The occupation of the Palestinian territory may be one of the most well-documented situations, with a long list of eminent United Nations experts, inquiries and missions having issued lengthy reports alleging that international crimes have been committed and that violations of international humanitarian and human rights law have occurred.

In order to effectively respond to the most serious situations worldwide and offer a real opportunity for victims to receive redress, the ICC must speed up its processes and immediately open an investigation into the situation in Palestine. The grave situation in Palestine demands that the Prosecutor moves into the stage of investigation. It is now, more than ever before, crucial that the ICC remains loyal to the Rome Statute which speaks of the end of impunity, as well as stands up for all victims of the most horrendous crimes.

Hurryat – Center for Defense of Liberties and Civil Rights

The Independent Commission for Human Rights