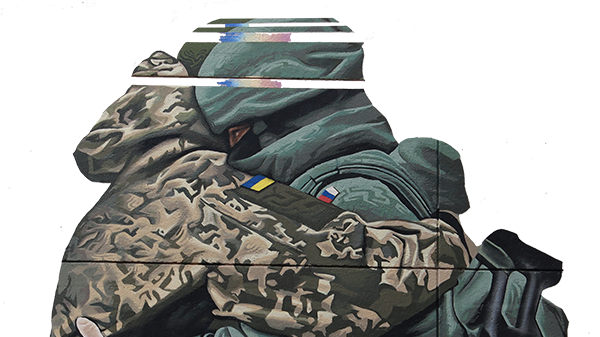 Global NGO World BEYOND War sought to rent four billboards close to the NATO headquarters in Brussels with messages of peace. These were small billboards at train stops. Here is the image that we sought to use:

The U.S.-based organization Veterans For Peace has partnered with us on this campaign. We’ve successfully rented a mobile billboard in Washington, D.C. for the image of two soldiers hugging. The image was first in the news as a mural in Melbourne painted by Peter ‘CTO’ Seaton.

In Brussels, however, the world’s largest outdoor advertising company, according to Wikipedia, JCDecaux censored the billboards, and communicated that with this email:

“First of all, we would like to thank you for your interest in our publishing opportunities via our web-based platforms.

“As mentioned on our purchase platform in the terms and conditions, not all communications are possible. There are a number of restrictions: f.e. no religiously oriented messages, no offensive messages (such as violence, nudity, me too related visuals…), no tobacco, and no politically oriented messages.

“Your message is unfortunately politically tinted since it refers to the current war between Russia & Ukraine and therefore cannot be accepted.

“We will ensure that the payment you made through the internet platform will be immediately refunded.

The rationale claimed above for the censorship is hard to take seriously, when a few minutes of searching turns up the following.

Here is a political JCDecaux ad promoting the French military;

Here is a political JCDecaux ad promoting the British military;

Here is a political JCDecaux ad promoting the British Queen;

Here is a political JCDecaux ad promoting an airshow promoting war preparations and the purchase by governments of expensive war weapons;

Nor can we take seriously the notion that large advertising companies simply must censor messages of peace and make up some excuse for it. World BEYOND War has on many occasions successfully rented billboards with pro-peace and anti-war messages from each of JCDecaux’s main rivals: including Lamar (see image here), Clear Channel (see image here) and Pattison Outdoor (see image here):

“The mass media is full of one-sided narratives and commentary supporting more weapons and war for Ukraine, but we cannot even BUY a message that promotes peace and reconciliation. We are trying to stop a longer and wider war — even a nuclear war. Our message is clear: War Is Not the Answer — Negotiate for Peace Now! As veterans who have experienced the carnage of war, we are concerned about the young soldiers on both sides who are being killed and injured in the tens of thousands. We know all too well that the survivors will be traumatized and scarred for life. These are additional reasons why the Ukraine war must end now. We ask you to listen to veterans who say ‘Enough is Enough—War is Not the Answer.’  We want urgent, good faith diplomacy to end the war in Ukraine, not more U.S. weapons, advisors, and endless war. And certainly not a nuclear war.”

The censorship is not unprecedented. Smaller companies have used the same trick numerous times of treating war as non-political but peace as political — and political as unacceptable. Large companies sometimes accept pro-peace billboards and sometimes do not. In 2019 in Ireland, we ran into censorship that generated almost certainly more attention than the billboards would have. In that case, I contacted a Sales Manager at Clear Channel in Dublin, but he stalled and delayed and evaded and prevaricated until I finally took a hint. So, I got in touch with a Direct Sales Executive at JCDecaux. I sent him two billboard designs as an experiment. He said he would accept one but refuse the other. The acceptable one said “Peace. Neutrality. Ireland.” The unacceptable one said “U.S. Troops Out of Shannon.” The JCDecaux executive told me that it was “company policy not to accept and display campaigns deemed to be of a religious or politically sensitive nature.”

Perhaps we are again dealing with a problem of “sensitivity.” But why should corporations out to maximize their profits have the ability to decree what is too sensitive and what isn’t for public space in so-called democracies? And, regardless of who controls the censorship, why must it be peace that is censored and not war? For the holidays perhaps we’ll have to put up a sign wishing everyone BLEEEEP On Earth.