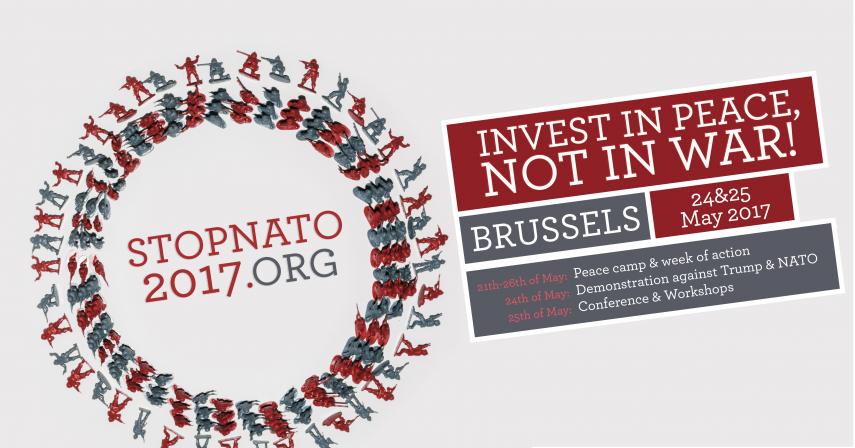 On the 25th of May, NATO leaders will come to Brussels for an important summit and for the inauguration of the new NATO headquarters. The international peace movement is organising a counter summit.

You are welcome to join the demonstration on the 24th of May, the international peace conference on the 25th of May and several non-violent direct actions.

US President Donald Trump has announced that he will increase the American military budget with 54 billion dollars and he urges Europe to boost military spending as well. The increase of the defense budgets of NATO member states up to 2% of their Gross Domestic Product will undoubtedly be one of the most important topics on this NATO summit. This represents 130 billion euros extra in the coming next years for Europe. The peace movement resists this overmilitarization. The peace movement doesn’t want more money for war, but investements in education, health care, employment, solidarity, etc.

Read more about the call for action and the demands of the peace movement here.

Demonstration: No to NATO, No to Trump - 24th of May

A broad platform of organizations calls for a demonstration in Brussels on the 24th of May against militarisation and military interventions, for the conservation of our planet, for human rights and against sexism, racism and all other forms of discrimination.

The STOPNATO2017- and peace block assembles at 5 pm on the corner of the Proximus building at Brussels North trainstation.

International peace conference: Stop NATO - 25 the of May

The 25th of May, simultaneously with the NATO summit, the international peace movement organizes an alternative counter summit. More than 50 international experts and peace activists will delve critically into the NATO and why we should resist it. Speakers at the conference, among others, are: Ann Wright (ex-colonel of the USA-Army and ex-diplomat, member of Veterans For Peace), Djordje Kuzmanovic (spokesperson on defence and international relations for the former French presidential candidate Jean-Luc Mélenchon), Marko Milacic (from the neutrality movement in Montenegro, who has been jailed for anti-NATO actions), Reiner Braun (co-president of the Nobel peace price winning organisation, the International Peace Council), Kate Hudson (representative of the British organization for nuclear disarmament, CND, who mobilises against the modernisation of the Trident system), Maz Saleem (British activist and spokesperson of the Stand Up Against Trump/Stop the War Coalition, whose father has been killed by Neo-Nazi’s) and many other people.

You can find the full program here.

The NATO summit is a great opportunity to exchange experiences, ideas and actions. From Sunday the 21th till Friday the 26th of May we will provide spaces for the international visitors of the counter summit, to meet, exchange ideas and prepare non-violent actions.

A peace rally is going to be held close to the NATO Headquarters on May 25th.