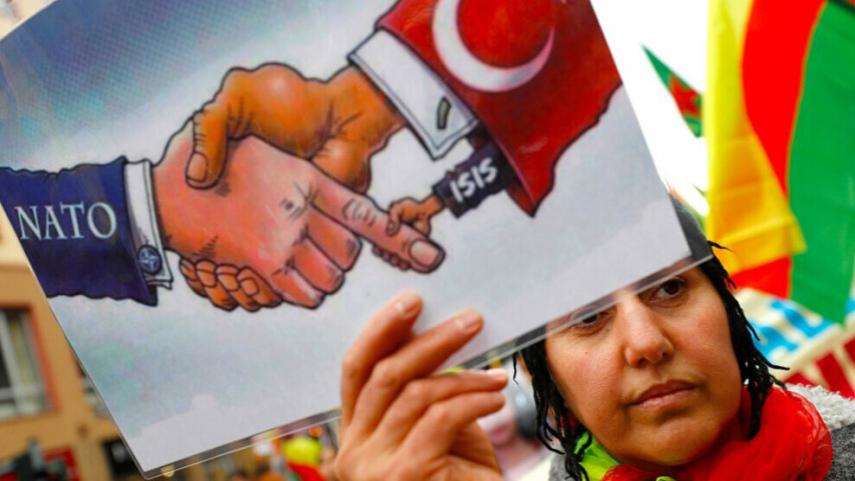 NATO member state Turkey constantly acts in blatant violation of NATO’s stated goals and norms, initiating campaigns of military aggression beyond its borders, targeting the Kurdish people in North and East Syria and in South Kurdistan (Northern Iraq) in a brutal and unending war of its own choosing, prompted by nothing more than the existence of the Kurdish people.

Even though in 1974 the Turkish state was criticized for its expansionist policy in Cyprus, the Turkish state nevertheless proceeded to occupy the country. Now, the Turkish state wants to occupy South Kurdistan (Northern Iraq). Unfortunately, in this case we see again the silence of the international community. Especially the organizations of which Turkey is a member -namely, NATO and the Council of Europe. Also, the EU, which leads discussions with Turkey concerning its potential admission, utters not a sound. Turkey’s militarism is also expanding in Libya, Yemen and other North African and Middle Eastern countries.

Military campaign as preparation of ethnic cleansing of the Kurds

The annihilation operations, dubbed Operation Claw-Lightning and Operation Claw-Thunderbolt, were launched by the Turkish military on 24 April 2021 in the Zap, Avashin and Metina areas of South Kurdistan (Northern Iraq). These unprovoked military operations are the beginning of a campaign of genocide against the Kurds, because they were launched on the anniversary of the Armenian Genocide that claimed the lives of 1.5 million Armenians in 1915, the same day that US President Biden officially recognized the Armenian Genocide. It cannot be a coincidence that the military annihilation war starts a day after the US President Biden spoke to Turkish President Erdogan on 23 April. While the USA is the leading force in NATO, the Turkish state has its second largest army.

Through enslaved Kurds, Kurdistan shall become the center of a regional war

In its hegemonic interests, the US wants to strengthen NATO in the Middle East. As the only NATO member state in the Middle East, Turkey has geostrategic importance for the NATO’s security interests and plans.  It should be clearly and categorically stated, without any confusion: For as long as NATO does not stop Turkey, this war is a NATO war against the Kurds.  For now, Turkey appears to enjoy the unwavering support of their NATO allies for a potentially huge assault against the Kurdish Freedom Movement and the PKK (Kurdistan Workers’ Party).

PKK is not the reason but result of the Kurdish Question