Give peace a budget! 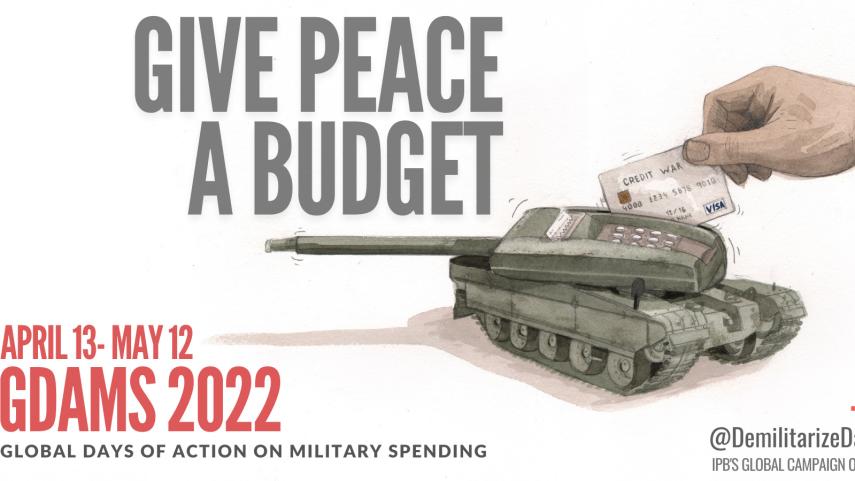 This year, the world reaped the horrors of its investments in tools of war. The violence being perpetrated on people around the world at the hands of militarized states has had devastating impacts on humanity and the environment. The $1.98 trillion spent on militaries in 2020 did not provide true security— instead, these bloated budgets for weapons and war kept us mired in cycles of violence. It is time for us to join together and call on governments around the world to cut military spending, and to instead invest in common and human security. We need to give peace a budget.

Russia’s military invasion of Ukraine in February highlighted the flaws of a militaristic approach to international affairs and security. Despite this, most politicians and media continue to push for solutions focused on military power projection and deterrence, to be funded with even higher military budgets. But if spending in the military could truly provide us with security, wouldn't we have achieved that already? Ever-growing military capacities and militaristic policies and discourses have only brought us more human and ecological devastation. More of the same will not change the situation. The collective military expenditure of NATO members, which is 18 times that of Russia, did not prevent President Putin from invading Ukraine. Still, its member states have committed to dedicate a 2% of their GDP to military spending in response to Russia’s aggression war. It should be obvious by now that countries trying to outspend one another by buying weapons of all sizes does not make up for a proper defense and security strategy. It has not worked in the past and it never will.

Similarly, we’re witnessing an arms race in the Asia-Pacific region that can only lead to increasing tensions and war. The experience of the Middle East has shown the impact of militarization and foreign intervention creating turmoil and conflict in the entire region for decades already, with painful and still very alive reminders in Afghanistan, Syria, Yemen, Palestine and Libya.

Global reliance on militarization destroys trust and undermines cooperation efforts among countries. By focusing on cooperation and multilateralism, we can reimagine international security in a way that does not exclude people across national lines. Governments must invest in and legitimize these alternatives, putting more options on the table so that the threat of war and annihilation can be taken off. While military spending increases, peacebuilding is still underfunded, and the collective action required to address the global emergencies of our time gets sidelined.

The costs of global militarism affect more than just foreign policy and international relations— they also prevent us from addressing crises like climate change, global pandemics, and the welfare of humanity. The latest report from the Intergovernmental Panel on Climate Change (IPCC) included another stark warning about the climate crisis, and yet national governments continue to invest more in the military than in keeping the planet habitable. The COVID-19 pandemic of the past two years has been another powerful illustration of the desperate need to reallocate public resources and investing in healthcare and welfare.

Military spending does not keep us safe, and prevents the global collaboration that is essential for human wellbeing. For all this, we call on civil society and the media to push for major reductions of military expenditures, instead of the increases announced in many countries.

We demand that governments reduce their military spending, and commit funding to common and human security instead— investing in the true needs of the people and the planet to build a just and sustainable peace.

To give it a chance, we need to give peace a budget.