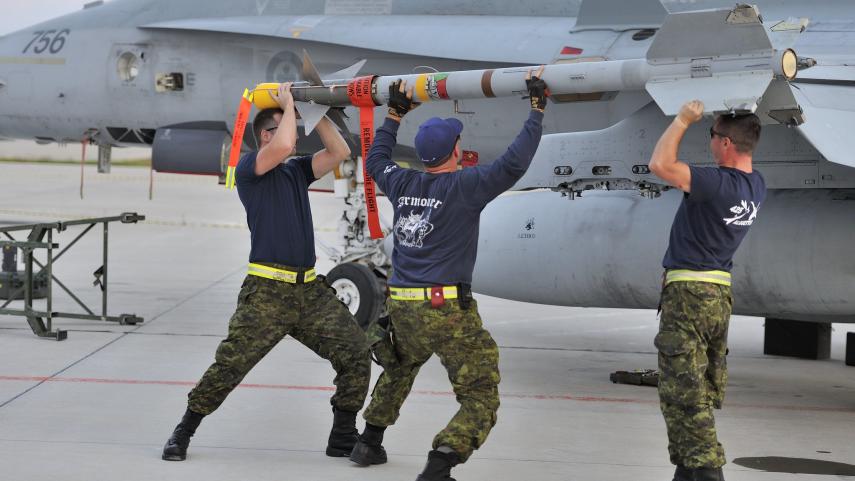 In a multipolar world with several emerging superpowers, the military alliance seems determined to help maintain Western military, political and economic hegemony in the world.

With the dissolution of the Warsaw Pact (mid 1991) and the Soviet Union (end 1991) and the German unification (October 1990) the official reasons of existence for NATO had disappeared. Although the heads of state confirmed the end of the cold war during their London NATO summit July 1991 there was no question of dissolving NATO, rather to reform it into a global player to serve the interests of its members.

Becoming a global player NATO reorganised itself in the years after the cold war by adopting several New Strategic concepts. The central part of the strategy was threefold:

1. The territorial enlargement of NATO towards the East of Europe

2. The transformation from a primarily defence into an intervention organisation

3. The construction of alliances or cooperation structures with partners all over the world

The US were very concerned that with the end of NATO they would lose the politico-military and consequently economic control over Europe. So they opted to reform NATO through the establishment of cooperation structures (partnership for peace) with the Eastern European countries or simply through admitting former Warsaw pact countries as new NATO members. Soon, the concrete enlargement of NATO took place in several waves from 16 in 1989 up to 30 member states now.

The end of the Warsaw Pact and the dissolution of the Soviet Union changed the whole strategic environment. The trans-Atlantic alliance was presented with an existential dilemma which was often summarised as “out of area or out of business”. Justification was found in Central and East European transformation that lead to economic, social and political difficulties, ethnical tensions and territorial disputes. Yugoslavia’s disintegration was a suitable example to underline this argument, but NATO leaders certainly also had the Mediterranean and the Middle East in their mind.

During the violent break-up of Yugoslavia, NATO would intervene on a number of occasions in Bosnia and against Serbia in the war for Kosovo. Soon after came 9/11, the invasion of Afghanistan and the Iraq War. Two years later, in 2011, NATO participated in the war in Libya with air and maritime operations and a maritime blockade targeting the troops of the Libyan regime of Gaddafi. In late 2011, NATO Secretary General Rasmussen called the NATO war in Libya the "most successful operation in history of NATO." But years of wars and occupation plunged Afghanistan, Iraq and Libya into chaos and more violence.

NATO became global, not only through military interventions, but also by making dozens of bilateral and multilateral agreements with third countries and regions in Eastern Europe, the Pacific, Middle East, Latin America and other parts in the world. The main purpose is to serve NATO’s geostrategic interests.

Under President Trump, transatlantic tensions rose between the US and several European NATO members. Since the appointment of the new president Biden, we can expect that much energy will be invested in NATO-cohesion so NATO can be prepared for next decade. Last year, a group of "experts" commissioned by NATO Secretary General Stoltenberg published the report "NATO 2030: United for a new Era". The experts put forward 138 proposals to adapt NATO to the so-called challenges of the next decade. It is written in a language very reminiscent of the Cold War period steeped in enemy images in a very threatening world. The report will be discussed in the next NATO Summit expected later this year.

In a multipolar world with several emerging superpowers, the military alliance seems determined to help maintain Western military, political and economic hegemony in the world. According to these NATO-Experts the alliance has to confront two "systemic rivals,": Russia and China. The Russian annexation of Crimea and the war in Eastern Ukraine served already as an argument for rearmament and military spending. At the NATO summit in Wales in 2014 member states committed themselves to increase military budgets to 2% of GDP within ten years. Currently, the European NATO States + Canada spent 63 billion dollars more compared to 2014 or 25% more.

New is the prominent place given to China in NATO's security doctrine. It is true that China is trying to expand its global influence – as is the case with the Belt & Silk Initiative - as any other country is doing to defend its interests, but so far it has been acting mainly with political and economic tools. Even when China's defence budget is growing strongly, it represents still less than a third of what the US is spending. With only one foreign military base (in Djibouti), the focus is very much on defending its borders and interests in nearby area’s and unlike NATO not on global military control and foreign military interventions.

The military alliance is pushing countries to increase their defence budgets and to invest more in military equipment, which affects budgets for tackling social and environmental issues.

The 2030-report also shatters the illusion that NATO is serious about nuclear disarmament. While we read that arms control plays an important role in today's security environment, NATO emphasizes that nuclear weapons have been a critical pillar of NATO’s collective defence since its inception. Moreover, according to these NATO-experts, “nuclear sharing arrangements play a vital role in the interconnection of the Alliance and should remain one of the main components of security guarantees of the whole Euro-Atlantic area”.

The report is clearly worried about the impact of the new Nuclear Ban Treaty (TPNW) on NATO's nuclear policy. In the report, we can read that all members "should recall their position on the Treaty on the Prohibition of Nuclear Weapons, namely that it will never contribute to practical disarmament, nor will it affect international law." Recent reactions and declarations of the US and NATO show that they are concerned about the impact of the TPNW and the wide support it receives among the population. NATO is afraid that if a member state joins the TPNW, the political cohesion of NATO itself will be in danger.

NATO also affects EU-policy. In recent years, NATO-EU relations have expanded considerably, as illustrated by the Joint Declarations signed by the leaders of the two organisations in 2016 and 2018. Looking out to 2030, NATO aims to increase cooperation with the EU. There are many other issues in the 2030-report that should worry us and that will determine NATO’s strategy in the coming decade.

NATO is an important driving force of militarization in Europe. The military alliance is pushing countries to increase their defence budgets and to invest more in military equipment, which affects budgets for tackling social and environmental issues. Even in times of dire needs as a result of the COVID-19 pandemic, NATO secretary-general Stoltenberg issued warnings that member states must stick to their commitment to increase military budgets. But these so called commitments only serves the military Industrial complex, not the people.

While NATO claims to serve security interests of its member states, the militarization, nuclear policy and the confrontation with China and Russia are making our world more unsafe.

Peace is not possible with NATO. What we need is a comprehensive security approach, that goes beyond the traditional state-centric and military approach and includes human, economic and environmental dimensions as well as the security of individuals. This can only be done by international organisations that focus on mutual trust, diplomacy and arms control.