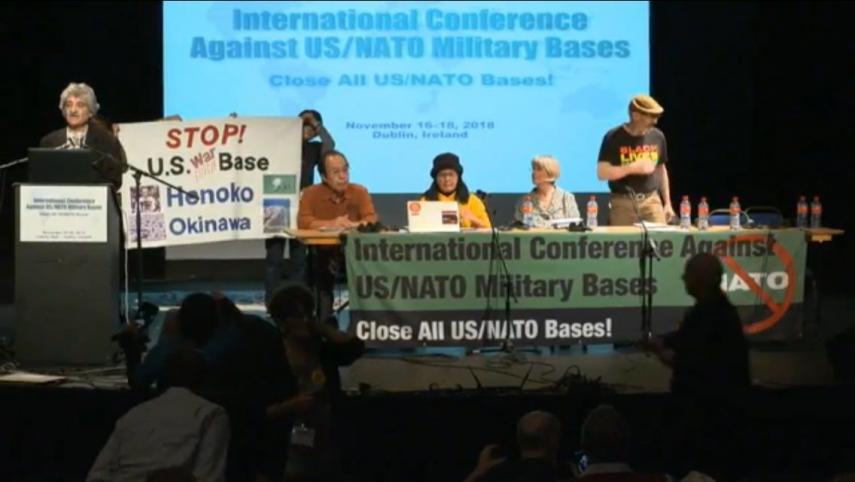 The first International Conference against US/NATO Military Bases was held on November 16-18, at the Liberty Hall in Dublin, Ireland. The conference was attended by close to 300 participants from over thirty-five countries from around the world.

This conference was the first organized effort by the newly formed Global campaign against US/NATO Military Bases, created by over 35 peace, justice and environmental organizations and endorsed by over 700 other organizations and activists from around the world. What brought all of us together in this International Conference was our agreement with the principles outlined in the Global Campaign’s Unity Statement, which was endorsed by the Conference participants.

The participants in the Conference heard from and shared with representatives of organizations and movements struggling for the abolition of foreign military bases from around the world about the aggressions, interventions, death, destruction, and the health and environmental damages that the military bases have been causing for the whole humanity along with the threats and violation to the sovereignty of the “host” countries.

The participants and organizers of the conference agreed as a matter of principle that while they oppose all foreign military bases, they consider the close to 1,000 US/NATO military bases established throughout the world, which constitute the main pillars of global imperialist domination by US, NATO and EU states, as the main threat to peace and humanity, and must all be closed. The NATO states’ military bases are the military expression of imperialist intervention in the lives of sovereign countries on behalf of the dominant, financial, political, and military interests, for the control of energy resources, transport roads, markets and spheres of influence, in clear violation of international law and the United Nations Charter.

The participants in the Conference call upon the organizations and movements who agree on the above to work closely with each other in a coordinated manner as a part of the Global Campaign to organize and mobilize the public around the world against US/NATO military bases.

While we call for the closure of all US/NATO military bases, we consider the closure of bases and military installations in certain countries and areas as needing special attention by the international movement. These, for example, include the Guantanamo US base in Cuba, the US bases in Okinawa and South Korea, the US Base in Rammstein/Germany, Serbia, the old and new US/NATO bases in Greece and Cyprus, the establishment of the new US African Command (AFRICOM) with its affiliated military bases in Africa, the numerous NATO bases in Italy and Scandinavia, the Shannon airport in Ireland, which is being used as a military base by US and NATO, and the newly established bases by the United States, France and their allies on and around the Syrian soil.

In order to continue our joint Global Campaign in solidarity with the just causes of the peoples in their struggle against foreign military aggression, occupation and interference in their internal affairs, and the devastating environmental and health impacts of these bases the participants agreed to recommend and to support coordinated actions and initiatives in the coming year (2019) which shall strengthen the global movement to expand the actions and cooperation while moving forward.

As a step toward this goal, the conference supports the global mass mobilizations against NATO’s 70th anniversary Summit in Washington DC, on April 4, 2919 and respective protests in the NATO member states and worldwide.

We declare our solidarity with the Cuban people’s decades-long efforts to take back their Guantanamo territory, illegally occupied by the United States, and declare our support for the Sixth International Seminar for Peace and the Abolition of Foreign Military Bases, organized by MOVPAZ for May 4-6, 2019, in Guantanamo, Cuba.

The participants express their most sincere thanks and gratitude to the Peace and Neutrality Alliance (PANA) Ireland, for their generous hospitality and support in hosting this historic Conference.

Adopted by the participants at the
First International Conference Against US/NA TO Military Bases
November 18, 2018
Dublin, Ireland