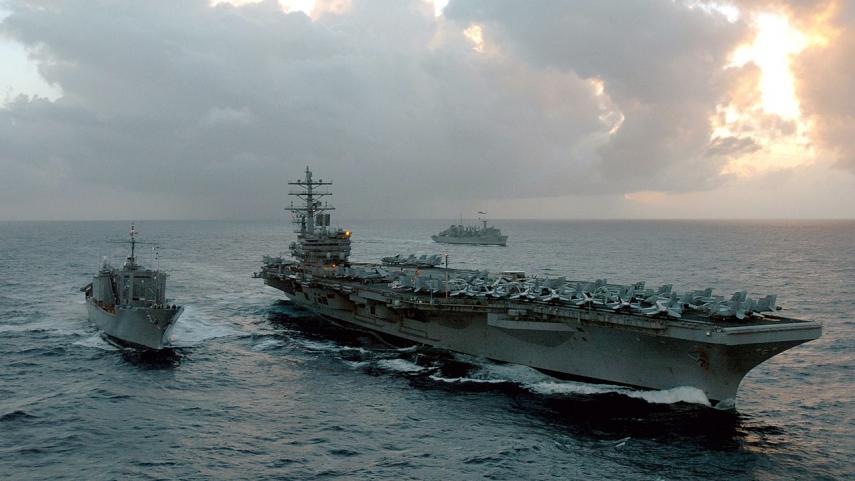 China’s seizure of maritime formations that are within the Philippines’ 200-mile exclusive economic zone in the West Philippine Sea is illegal and should stop.

Beijing’s claim of 90 percent of the South China Sea does not have any legal basis and is a purely arbitrary claim that tramples on the rights of five other countries, including the Philippines, that border on this body of water, which belongs to the global commons.

We cannot, however, be narrow-minded and myopic and single out China for condemnation and limit our demand to asking it to “leave” the area. We must also ask the United States to pack up and leave. This is not just for reasons of justice. It is also for the very practical reason that without a US military withdrawal from the South China Sea, China will not depart.

Without a US military withdrawal from the South China Sea, China will not depart.

China’s moves in the West Philippine Sea and the South China Sea are unjustifiable but they are understandable. The reason Beijing has made the provocative moves of seizing maritime formations from the Philippines is to place surface-to-air missile emplacements on them as part of an effort to extend a defensive perimeter to ward off a potential US attack. Even the Pentagon does not view China’s moves in the South China Sea as offensive in nature but as part of Beijing’s overall strategy of strategic defense.

Is China being paranoid?

No. First of all, the reality is that the South China Sea is and has been an “American lake” since World War II. The US 7th Fleet controls the South China Sea with its carrier task forces, accompanied by scores of surface ships, nuclear-powered and nuclear-armed attack and strategic submarines, and provocative air reconnaissance with fighter support up to 12 miles off the Chinese coast. This is the spearhead of a forward-deployed military presence of some 50 major US military bases ringing China from Northern Japan to Diego Garcia in the Indian Ocean.

The South China Sea is and has been an “American lake” since World War II.

Second, the operative warfighting doctrine of the US is “Airsea Battle,” which involves cruise missiles that can overcome Chinese anti-missile defenses to deliver conventional and nuclear payloads on China’s coastal industrial infrastructure and “blind” its electronic defenses.

Third, from Obama to Trump to Biden, China has been defined as the US’ strategic enemy, with Biden’s Department of Defense zeroing in on China as “DOD’s No. 1 pacing challenge,” to meet which it “will develop operational concepts, capabilities and plans to bolster deterrence and maintain its competitive advantage.”

The South China Sea is today the world’s premier hotspot, with US and Chinese ships engaged in “war games” of chicken where opposing ships and planes bear down on each other to swerve only at the last minute. The danger of a ship collision escalating into a major confrontation involving the use of conventional arms or nuclear arms cannot be discounted in a region where there are no rules of the game except a very unstable balance of power.

The danger of a ship collision escalating into a major confrontation cannot be discounted.

Beijing will not stand down unless the US withdraws its military threat to China as well. Thus, the Philippines and the Association of Southeast Asian Nations (Asean) must take the initiative and propose a demilitarization agreement that will involve China’s withdrawal from maritime formations seized from the Philippines, cease interfering with the livelihoods of Filipino and other fishers, and shelve its claims to the whole South China Sea, in return for the US’ withdrawal from the area of its 7th Fleet and five bases in the Philippines and junking the Visiting Forces Agreement.

If successful, these measures could eventually pave the way for more positive relations between China, the Philippines, and Asean built on jointly developing the resources of the South China Sea and protecting its unique ecosystem. Bringing about this future based on common prosperity is not impossible, but the first hard steps must be taken.

Walden Bello is national chair of Laban ng Masa and the international adjunct professor of sociology at the State University of New York at Binghamton.