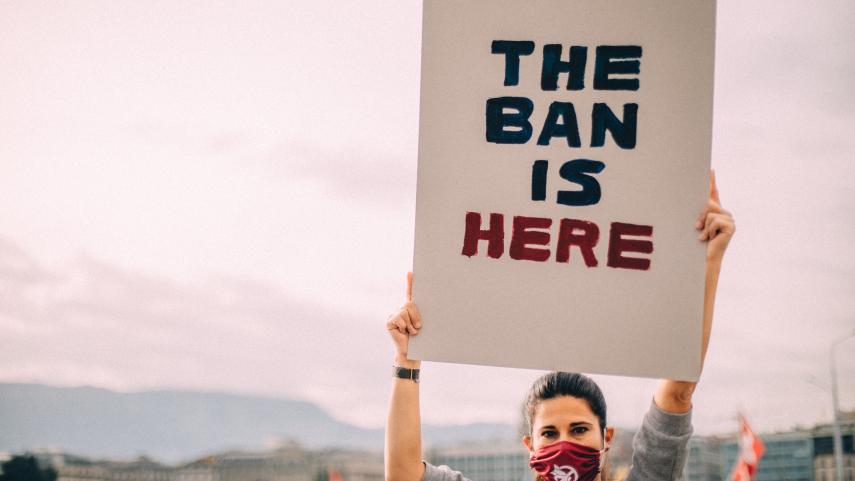 Photo: ICAN
NATO must stop its obstruction of the UN Treaty on the Prohibition of Nuclear Weapons
Opinion
20/01/2021 - No to War - No to NATO Network
4 minutes

The No to War - No to NATO Network denounces the North Atlantic Treaty Association’s (NATO) continuing efforts to obstruct the UN Treaty on the Prohibition of Nuclear Weapons (TPNW) that comes into force on January 22, 2021.

Statement of the international network No to War - No to NATO (*)

On December 15, NATO issued a statement that once again voiced its groundless opposition to the Treaty on the Prohibition of Nuclear Weapons (TPNW). NATO reiterated its commitment to remain a nuclear alliance “as long as nuclear weapons exist”. Yet, three alliance members, United States, United Kingdom and France, are currently upgrading their nuclear arsenals. Another five NATO countries, Belgium, Germany, Italy, Netherlands, and Turkey host American nuclear weapons. It is the continued reliance and modernization of nuclear weapons by NATO members that make nuclear abolition unlikely.

NATO falsely states that the TPNW weakens the 50-year-old Non-Proliferation Treaty (NPT). NATO claims that the NPT "remains the only credible path to nuclear disarmament". Yet, nuclear weapon states have ignored Article 6 of the NPT that commits them to work ‘in good faith’ towards nuclear disarmament. Instead, they have used the 1970 treaty to retain the nuclear status quo. It is because progress has stalled under the NPT that non-NATO countries and civil society organizations came together to negotiate the TPNW in 2017.

NATO disingenuously argues that the TPNW "risks undermining the global non-proliferation and disarmament architecture” and that it is also “at odds” with it. This is totally untrue, as the preamble of the TPNW clearly states that it reaffirms that the full and effective implementation of the NPT “serves as the cornerstone of the nuclear disarmament and non-proliferation regime” and “has a vital role to play in promoting international peace and security” – the problem has been that the NPT has not been fully and effectively implemented by the nuclear weapon states, especially the alliance counties.

NATO is lying when it says that the TPNW risks undermining the “IAEA safeguards regime” that supports the NPT. Article 3 of the TPNW requires that all state parties are obligated to maintain safeguards as defined by the IAEA. Another false allegation is that the TPNW does not measure up to the NPT because it lacks “rigorous or clear mechanisms for verification” but the TPNW does not detail these either and verification measures are mentioned in Article 4 of the treaty.

NATO’s false accusations are an attempt by the alliance to undermine the TPNW. The US, the UK and France have been trying to sabotage the treaty for the past three years. NATO members refused to participate in discussions for the new treaty and attempted to influence other countries not to take part. Even so, the TPNW was approved by 122 states and currently 86 states have signed and 51 have ratified it. Further, two countries that once possessed nuclear weapons, South Africa and Kazakhatan, have now signed and ratified the TPNW South Africa ended its nuclear weapons programme in 1989. All the bombs (six constructed and one under construction) were dismantled, and the country acceded to the NPT in 1991 and ratified the TPNW in February 2019. Kazakhstan suffered from hundreds of Soviet Union bomb tests from 1949 to 1989. After the Soviet Union was dissolved it became independent in February 1991, signed the NPT in the same year (as did Belarus and Ukraine) and completed the transfer of 1,400 nuclear weapons to Russia by 1995. Kazakhstan ratified the TPNW in August 2019.. One NATO member did participate in the initial stages of the TPNW, the Netherlands, yet it voted against the treaty because it was incompatible with their obligations to NATO. Five NATO members, the Netherlands, Germany, Italy, Belgium, and Turkey, host American nuclear weapons which is a violation of the TPNW.

Despite the disappointing pronouncements of NATO members to oppose the TPNW, polls show that the majority of public opinion supports their government joining the treaty. As well, former leaders of NATO states, including two former NATO secretary-generals, recently signed an open public letter calling on their governments to join the treaty.

The No to War - No to NATO Network condemns NATO’s policy of deterrence and its first-use posture prevent a world free of nuclear weapon and are incompatible with the TPNW. We call on all UN member states to reject NATO’s intransigence and sign and ratify the TPNW.

The Network fully supports the TPNW that helps establish a new international norm against the testing, production, stockpiling and use of nuclear weapons. The TPNW stigmatizes these weapons of mass destruction that threaten all people and the planet.

The Network also maintains that NATO is a Cold War relic that has undermined international law and global cooperation and must be disbanded. Common security can only be achieved through peaceful conflict mediation and international diplomacy through the United Nations.

No to War - No to NATO Network
Thema
Kernwapens