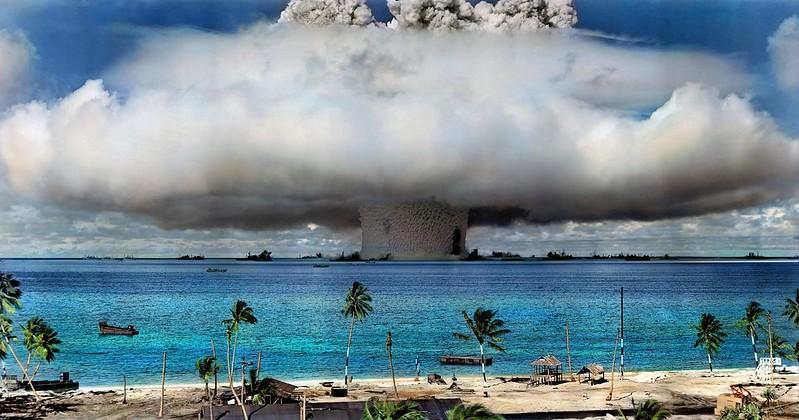 NATO Secretary-General Stoltenberg will chair a meeting of the 'Nuclear Planning Group' to discuss Russian nuclear threats and NATO's nuclear role. He announced that 'Steadfast Noon' manoeuvres will take place next week. What Stoltenberg did not disclose is that these "routine exercises" will occur at the military air base in Kleine-Brogel, Belgium.

‘Steadfast Noon’ is the code name for annual joint multinational exercises carried out by NATO countries with a central role for Belgian, German, Italian and Dutch fighter aircrafts responsible for the use of nuclear arms in war times as part of NATO’s nuclear sharing policy.

The nuclear exercises are held at a moment nuclear tensions between NATO and Russia are at an all-time high. President Putin has repeatedly threatened to deploy "all weapons systems" in case of a threat to Russia's "territorial integrity" - since the annexation of Ukrainian territory, a very elastic concept.

It’s not the first time the Russian president makes use of nuclear blackmailing. Nor is he the first. In 2017, for instance, President Trump used nuclear blackmail against North Korea. Putin could be bluffing, but we don't know for sure. Given his recent military actions, he has in any case gained a reputation for being unaccountable.

The current nuclear threat is a consequence and manifestation of the refusal of nuclear-armed states to work towards complete nuclear disarmament. Nevertheless, in the now more than half a century old Non-Proliferation Treaty (NPT), they have committed to do so. The US, the leading NATO superpower has contributed to the current nuclear danger by cancelling a whole series of disarmament treaties, such as the ABM Treaty, the INF Treaty, the Open Skies Treaty and the nuclear deal with Iran.

The dangerous illusion of 'deterrence'

According to NATO, US nuclear weapons in Belgium, Germany, Italy and the Netherlands ensure our security because they deter the adversary. However, the concept of 'nuclear deterrence', which dates back to the 1960s, is based on very dangerous assumptions that do not take into account more recent geopolitical and technological developments.

For example, the development of new weapon systems, such as hypersonic weapons or 'small' tactical nuclear weapons with a lower explosive power are considered more 'deployable' by military planners, contradicting the concept of nuclear deterrence.

Moreover, the concept assumes rational leaders making rational decisions. To what extent can we trust leaders like Putin, or formerly Trump, knowing that presidents of the world's two largest nuclear weapons powers have de facto autonomous authority to deploy nuclear weapons? NATO itself regularly says the Russian leader is behaving "irresponsibly". If the Kremlin feels further cornered, it is perilous to speculate on the effectiveness of deterrence.

In other words, a nuclear escalation cannot be ruled out and then military bases with nuclear weapons, such as in Kleine-Brogel, are among the first potential targets. So they do not make us safer, on the contrary. Let us also not forget that NATO's headquarters is in Brussels and that conducting nuclear manoeuvres in Belgium, marks our country as an even more important potential target.

In addition, Steadfast Noon involves preparation for illegal military tasks of a genocidal nature. According to the Non-Proliferation Treaty -to which all countries participating in the exercises are parties- it is forbidden to "directly" or "indirectly" "transfer" nuclear weapons or put them under "control” of non-nuclear-weapon states. The use of Belgian, German, Italian and Dutch fighter jets to deploy nuclear bombs -after being activated by the US in wartime- is clearly a violation of the NPT.

We call on the government to take the current nuclear weapons threat very seriously. Allowing NATO nuclear exercises to continue only throws oil on the fire. There is an urgent need for de-escalation in Ukraine and general nuclear disarmament.

Belgium must send a political message by distancing itself from these illegal nuclear task, which, moreover, is not a NATO obligation. US nuclear weapons, deployed in Belgium in the early 1960s after the government lied and deceived parliament, must be removed from our territory. Then Belgium could accede to the new UN Treaty on the Prohibition of Nuclear Weapons (TPNW) to be in a diplomatic position for taking the lead in Europe's nuclear disarmament. This would mean that our government has gained the authority to advocate and take initiatives for a nuclear-weapon-free Europe, from west to east, incrementally and reciprocally, with verifiable commitments.

Above all, it is imperative that open cards are finally played. Every time the government is questioned about the nuclear weapons in Kleine-Brogel, the Belgian government undemocratically answers with the repeated phrase: "We neither confirm nor deny" their presence. Parliament and Belgian citizens have the right to be informed about weapons of mass destruction on their territory, about existing plans to replace them with high-tech and more easily deployable B61-12 nuclear bombs in the coming years, and about the fact that NATO nuclear exercises are taking place in their country. Transparency should be a basic feature of a healthy democracy.