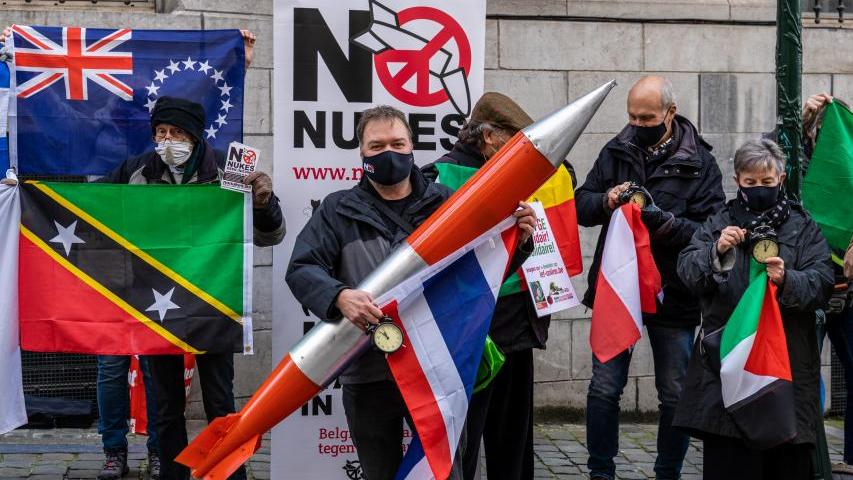 Belgium is one of the five European countries with US nuclear bombs on its soil. In today's light it might be interesting to briefly outline how those weapons of mass destruction got in my country and why it is so difficult to get rid of them.

In 1962 a governmental law was voted to allow the free passage of NATO troops through Belgian territory as well as their stationing. At the time, a Belgian Member of Parliament wanted to add an article to exclude nuclear weapons under the provisions of the law. But the government convinced the initiator of the amendment to withdraw it assuring him and other MP’s that the deployment of nuclear arms would be of course only happen under parliamentarian authorization. A year later, the US deployed secretly and with governmental approval nuclear gravity bombs on Belgian territory without any parliamentary debate or permission. The incident illustrates how democracy is inferior to military interests and strategies of the US and NATO.

Until today, the government maintains a policy of ambiguity, neither confirming nor denying the presence of nuclear bombs in Belgium, blocking any normal parliamentarian debate.

However, it is no secret that about 150 US B61 nuclear bombs have been deployed in five European countries as part of NATO's nuclear sharing policy. Belgian fighter jets are responsible for employing these nuclear bombs in wartime - as it is the case for Germany, Italy and the Netherlands- which is in breach with the Non Proliferation Treaty (NPT) that prohibits the transfer to or control over nuclear weapons by non-nuclear weapon states. These bombs will soon be replaced by new B61-12 nuclear bombs as part of a $ 10 billion US modernization program. They will be equipped with a new guided tail kit assembly and variable yield options. Because of their precision and low yield options these nuclear weapons are considered ‘usable’, lowering the threshold for a nuclear war. In 2018, Belgium bought new F35 fighter Jets that will be nuclear capable as we learned last year.

Various surveys show that the majority of the Belgian population does not want nuclear bombs in Belgium. According to a recent survey last year, 77% of the population wants Belgium to join the TPNW (even if the US were to exert pressure, 66% are still in favour). The population's anti-nuclear weapons position was also translated cautiously into the coalition agreement that was approved at the end of last summer noting that “Belgium will play a proactive role in the 2021 NPT Review Conference and, together with European NATO allies, will explore how to strengthen the multilateral non- proliferation framework and how the UN Treaty on the Prohibition of Nuclear Weapons can give new impetus to multilateral nuclear disarmament. ”

Nevertheless, Belgium voted against a resolution in the General Assembly of the United Nations last December to welcome the TPNW and asking countries to accede. All NATO member states rejected the resolution. NATO is openly campaigning against the TPNW and a global nuclear disarmament regime. According to a position of the North Atlantic Council (December 15, 2020): “As long as nuclear weapons exist, NATO will remain a nuclear alliance. Allies are determined to ensure that NATO's nuclear deterrent remains safe, secure, and effective, and reject any attempt to delegitimise nuclear deterrence. We do not accept any argument that the ban treaty reflects or in any way contributes to the development of customary international law. ” The famous NATO 2030 report that will lay the foundation of the new NATO strategy at the upcoming NATO summit in Brussels states: “NATO should continue and revitalize the nuclear-sharing arrangements that constitute a critical element of NATO's deterrence policy”.

The pressure from the US and NATO to maintain the nuclear deterrent is huge. The Belgian government is divided over the issue. Greens and Social Democrats want Belgium to remove the nuclear bombs and sign the TPNW, but the Liberals and Christian Democrats want us to remain loyal to NATO’s ‘nuclear sharing’-policy. According to the Greens and Social Democrats, Belgium will play a proactive role at the next NPT review conference this summer and pledge to work within NATO for a new policy on nuclear weapons. But it looks like these parties don't want to get the government into trouble over nuclear weapons.

The peace movement is campaigning to pressure the government to be serious about nuclear disarmament and to sign the TPNW. Last year, under the initiative of the peace movement, 150 mayors joint an appel asking the government to sign the TPNW. Soon we’ll launch an official petition under the new right of petition law to amend the 1962 law so that the deployment of nuclear weapons in Belgium will at least need a parliamentarian consent. The Belgian peace movement participates actively in the new European "nuke free Europe" campaign against NATO's nuclear sharing policy and for the removal of all nuclear weapons in Europe. In Belgium, Germany, the Netherlands and probably also Italy, there will be actions near military bases with US nuclear weapons. Remember how a similar campaign against the deployment of nuclear missiles in Europe in the eighties resulted in a mass movement bringing million’s of people into the streets. Our first goal is to get the nuclear arms back on the political agenda and to raise awareness among other movements (trade unions, the climate movement, women and youth movement) about the planetary threat of nuclear weapons and the need to act. To recall the iconic slogan of Greenpeace: “No time to waste!”

The above text is part of a contribution to an Asia Europe People’s Forum (AEPF) Webinar on 16 april 2021: 'Treaty on the Prohibition of Nuclear Weapons (TPNW) and People’s Campaigns'