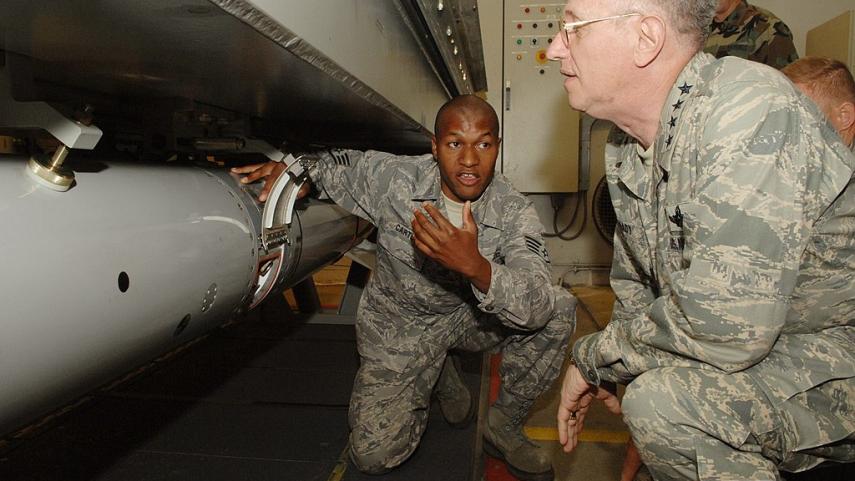 Only gradually, nuclear weapons became a central part of NATO's military post-cold war strategy. In 2010 NATO proclaimed itself a 'nuclear alliance'. Today, the military alliance is waging a disinformation campaign with the false claim that the new Ban Treaty (TPNW) undermines the nuclear disarmament regime.

On 22 January, the Treaty on the Prohibition of Nuclear Weapons (TPNW) entered into force. That day Cambodia ratified the treaty as 52nd state. A milestone in history. Three and a half years ago (the 7th of July 2017), after several years of negotiations, 122 countries voted in favour of the new Ban Treaty, with one against (Netherlands), and 1 official abstention (Singapore). 69 nations did not vote at all. They didn’t even take part in the negotiations. Among them the nuclear weapon states and all NATO members except the Netherlands.

The NATO member states have been boycotting the negotiations although the TPNW is an implementation of Article 6 of the Non-Proliferation Treaty (NPT) in which the parties to the treaty commit to negotiate a treaty for complete nuclear disarmament. Today, NATO is waging a disinformation campaign with the false claim that the Ban Treaty undermines the nuclear disarmament regime. NATO sees the treaty as a threat to the organization's political unity over its nuclear strategy. According to NATO: “Nuclear weapons are a core component of NATO's overall capabilities for deterrence and defence, alongside conventional and missile defence forces. NATO is committed to arms control, disarmament and non-proliferation, but as long as nuclear weapons exist, it will remain a nuclear alliance. ”

The collectivization of nuclear responsibility

So, only gradually, nuclear weapons became part of NATO's military strategy. From the 1960s, the US began to deploy nuclear weapons in other NATO member states, giving them a role in the planning and preparation of nuclear war. In the years that followed, all countries except France became involved in the nuclear deterrent policy, which was increasingly defined as a form of alliance solidarity. The reason? International support among the population for nuclear disarmament grew. In the 80’s many hundreds of thousands demonstrated in European and US-cities opposing new deployments of nuclear arms. The  strengthening of humanitarian and  anti-nuclear norms during and after the  Cold War played a key role in pushing NATO to  adapt. This led to the collectivization of political responsibility for nuclear weapons.

First, the nuclearization of NATO as an organizational identity allowed pro-nuclear actors to justify costly nuclear modernization programs and nuclear deployments as contributions to alliance "solidarity" and "cohesion". Second, this nuclearization of NATO undercut the potential for intra-alliance resistance to nuclear arms. Calls for nuclear disarmament could thus be seen as anti-NATO.

Nuclear sharing became a core component of NATO’s strategy. Of the three nuclear powers in NATO (France, the United Kingdom and the United States), only the United States has nuclear arms in other member states: Belgium, Germany, Italy, the Netherlands and Turkey. Once there have been also US nuclear arms in Canada (1950-1984), Greece (until 2001) and the UK (until 1992). Currently, the US has about 150 tactical B61 gravity bombs deployed in Europe. They have to be mounted into (not in Turkey) dual capable aircraft in war time. This can be considered as a transfer or control by non-nuclear states of nuclear arms which would be in breach with the non-proliferation treaty (NPT) of 1970. The NPT prohibits the direct or indirect transfer or control of nuclear weapons to non-nuclear states. But according to the US the NPT is not valid anymore in war time (argument: the purpose of the NPT to avoid war failed). These bombs will soon be replaced by new B61-12 bombs. They are equipped with an electronic tail kit that can guide the bomb to its target.

They have also lower yield options. The mixture of both, precision and lower yield options could be seen by war planners as more useable allowing some targets that previously would not have been attacked because of too much collateral damage to be attacked anyway. This is a very dangerous development. The new B61-12 will increase the danger of a war with nuclear weapons eroding the concept of deterrence.

According to recent surveys in several European countries, a majority of the population in Europe is in favour of a ban on nuclear weapons. This is what 77% of those surveyed want in Belgium, 89% in Spain, 87% in Italy, 78% in the Netherlands and Denmark. The challenge for the peace movement is to translate that support from the population into political pressure and to get nuclear weapons back high on the political agenda. For several months, representatives of the peace movement have been preparing a call to hold a month of actions against nuclear weapons in September. We must not miss that opportunity because in a few years' time the new bombs will be deployed in Europe. We are also witnessing the development of plans for the renewal of nuclear arsenals in nuclear weapon states, worth many billions of dollars.

NATO and the US are clearly frightened by the consequences of the entry into force of the TPNW. Remember how late last year the US urged countries to withdraw from the TPNW. The military alliance is campaigning against the TPNW with false claims. Last December 15, NATO released a statement stating that: The ban treaty will not change the legal obligations of our countries with respect to nuclear weapons. According to NATO, the TPNW will undermine the nuclear disarmament regime and the NPT, although it is rather an implementation of Article 6 of the NPT. NATO falsely claims as well that there are no control and verification mechanisms in the TPNW although article 3 clearly states that non-nuclear weapon states shall “maintain its International Atomic Energy Agency   safeguards obligations” at a minimum and the TPNW at least mentions the principle of verification mechanisms for nuclear disarmament, which is not the case in the NPT.

In any case, the reactions and declarations of the US and NATO show that they are concerned about the impact of the TPNW and the wide support it receives among the population. NATO is afraid that if a member state joins the TPNW, the political cohesion of NATO itself will be in danger.