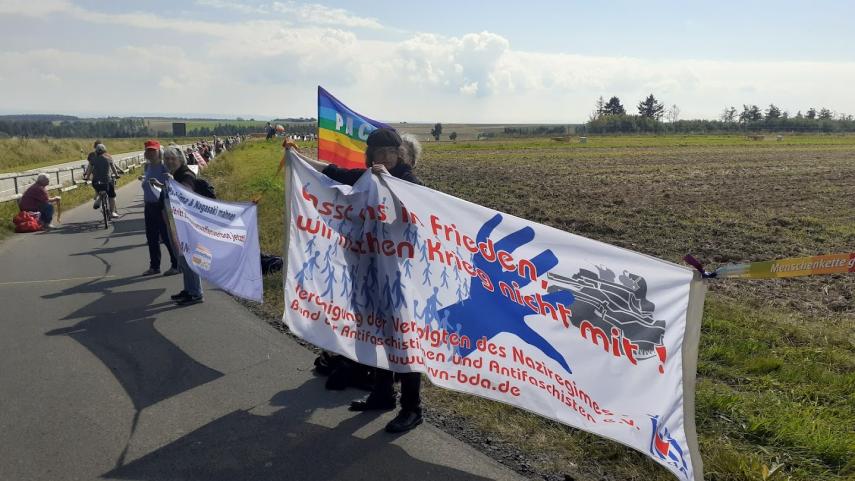 On Sunday 5 September, the European month of action against nuclear weapons in Europe was kicked off in Büchel, Germany. 800 peace activists formed a human chain to protest against the US nuclear bombs at the Fliegerhorst air base as part of NATO's nuclear sharing arrangements.

The action took place just weeks before the September 26 federal elections to call on Germany to join the UN nuclear weapons ban (TPNW), which has been in force since January 22, 2021. The peace movement has been campaigning against nuclear arms at the air base for 25 years. The human chain was organized by the campaign “Büchel is everywhere! Nuclear Weapon Free Now".

“The deadlock in nuclear disarmament must finally be broken. The incoming federal government can no longer ignore the nuclear weapons ban that came into effect in January and must finally join the treaty! The current government's arguments against this historic treaty are poor. That does not alter the fact that billions are being invested in nuclear armament," said Marion Küpker, spokeswoman for the campaign. "Despite railway strikes and the deteriorating corona situation, we were able to send out a strong message with 800 participants," Küpker continues.

At around 1 p.m., a mile-long human chain was formed. To respect corona distances, the protesters used peace ribbons and banners. The participants also included activists from other European countries. Several speeches were held afterwards. To emphasize the European dimension, there were also speakers from Belgium, the Netherlands and Italy.

“The European peace movement is working together to end NATO’s nuclear sharing. There is a need for a policy of détente, which means the extension of international cooperation on climate to security and peace,” said Angelika Claußen, President of IPPNW Europe and Co-President of IPPNW Germany. Her organization, the International Physicians for the Prevention of Nuclear War (IPPNW), won the Nobel Peace Prize in 1985 for its efforts to highlight the medical and environmental consequences of nuclear war.

Büchel Air Base is the last remaining US nuclear weapons site in Germany (Pershing II and Cruise Missiles were also deployed in Germany in the 1980s). As in Belgium, the Netherlands, Italy and Turkey, the current nuclear bombs will soon be replaced by B61-12 nuclear bombs with a variable explosive power and a greater precision due to the digital guidance system. Germany has committed itself to expanding and modernizing the airbase, an investment for which EUR 256 million has been earmarked. In addition, it is also planned that new fighter jets will be purchased to transport these nuclear bombs, which will cost billions. The German peace movement speaks of a 'ridiculous expenditure'. Representative opinion polls show that a large majority of the population wants the withdrawal of nuclear weapons.

In the coming weeks, actions are also planned in Volkel (Netherlands, on September 25), Great Britain (in a dozen places on September 26) and in Italy. In Belgium, the Belgian Coalition against Nuclear Weapons calls on you to participate in the 'Bikes not Bombs' cycling tour on Sunday 26 September. That day has been declared by the UN as the International Day for the Elimination of Nuclear Weapons.