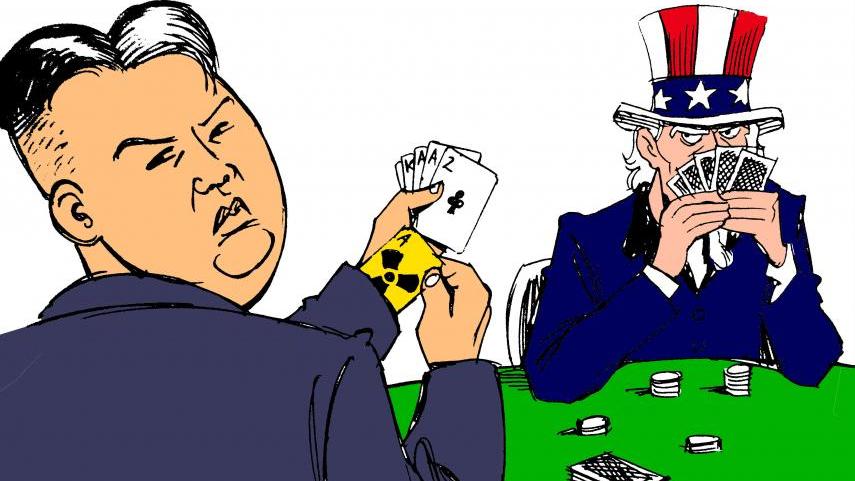 The crisis in North Korea has turned northeast Asia into the most volatile nuclear flashpoint in the world today—and exposed the bankruptcy of U.S. nuclear policy.

For decades, the United States has defended the continued possession of a vast nuclear arsenal as a necessary evil to deter nuclear attack by other countries. But now that North Korea says it has successfully tested an intercontinental ballistic missile that can “reach anywhere in the world,” we are told this is an intolerable risk, because such an attack cannot be reliably deterred. That may very well be true.

Deterrence requires that nuclear arsenals be controlled by emotionally stable leaders with sound judgment and a solid understanding of the international situations with which they must deal. Leaders who understand the catastrophic consequences their people will face if they initiate a nuclear war, who can in fact be deterred.

As a letter signed last summer by more than fifty Republican national security experts observed, Trump “is unable or unwilling to separate truth from falsehood . . . lacks self-control and acts impetuously . . . has alarmed our closest allies with his erratic behavior” and overall exhibits “dangerous qualities in an individual . . . with command of the U.S. nuclear arsenal.” And the United States has, not a handful of nuclear weapons, but 6,800.

Large nuclear arsenals were not supposed to fall into the hand of such people. The solution is not to change the finger on the button but to get rid of the button altogether.

A potential confrontation between Kim Jong-un and Donald Trump is only the most glaring evidence that deterrence does not work.

Security experts warn that terrorists could hack into U.S. or Russian command and control systems, and trigger the launch of missiles that are never supposed to be used.

There have been more than a dozen occasions since 1962 when a nuclear nation began the process of launching its nuclear weapons, often in the mistaken belief that the other side had launched or was about to launch an attack.

So what are we to do?

In the specific case of North Korea, it is clear that there is no acceptable military solution. Even a war that does not escalate to the use of nuclear weapons will have devastating consequences. There is general agreement that the thousands of artillery pieces aimed at Seoul would cause horrific loss of life. Less attention is paid to the 24 nuclear power plants in South Korea which function as pre-positioned weapons of mass destruction waiting to be attacked.

The United States has treated negotiations with North Korea as a reward to be offered when that nation agrees to end its nuclear weapons program. We need to see these instead as a means to attain that policy goal. There is no guarantee that negotiations will work, but there is no good alternative to trying.

On the broader question of global nuclear arsenals, a similar change in U.S. policy is also needed. We need to abandon nuclear deterrence, the magical idea that nuclear weapons somehow prevent themselves from being used, and seriously pursue the security of a world free of these weapons.

The United States, as its highest national security priority, needs to initiate negotiations for a nuclear weapons convention. The goal should be to set a timeline for the elimination of all of these weapons, and create a rigorous verification and enforcement regime to make sure the weapons are dismantled.

Here, too, there is no guarantee of success. The United States may not be able to convince the other nuclear weapons states to join in these negotiations, and the process itself will be difficult. But we need to try because there really is no alternative. As long as these weapons exist, we are living on borrowed time, and, if we do not act, sooner or later our time will run out.

This article first published in the Progressive