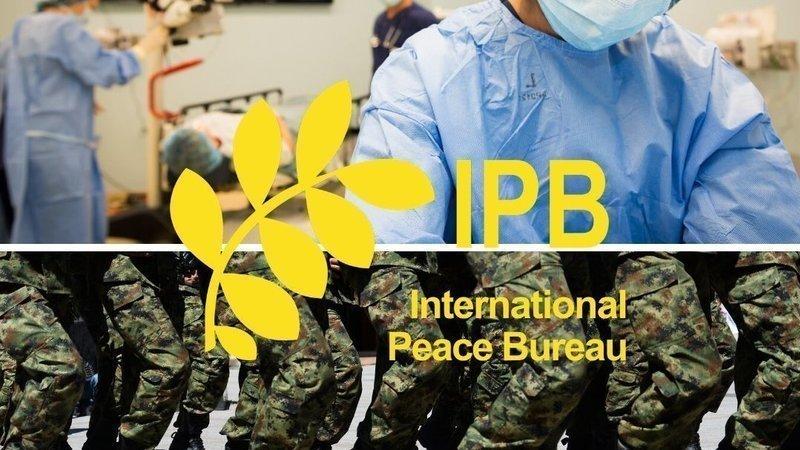 Petition: Invest in healthcare instead of militarization
Article
04/04/2020 - IPB
3 minutes

We, the signatories, call on the world leaders meeting at the General Assembly of the United Nations*, to dramatically reduce military spending in favor of healthcare and all social and environmental needs.

Together with the International Peace Bureau, the world’s oldest peace organization and Nobel Prize winner, we are witnessing the consequences of irresponsible political decisions that have led to dramatic under-investment in healthcare. All over the world, health systems are reaching the limits of their strength and heroic front-line staff are under massive pressure. The coronavirus emergency shows the weakened state that our societies find themselves in: a world driven by financialization, shareholder value, and austerity has weakened our ability to defend the common good and placed human life in danger on a global scale.

Employees fearful of job and income loss are tempted to go to work sick. The elderly are vulnerable and need help. The virus hits the weakest hardest. Privatization, austerity measures, and the neoliberal system have brought local, regional and national health services to the brink of collapse.

We can already draw lessons for the future – healthcare is a human right for young and old, for all people in all parts of the world. Healthcare must never be slashed or subordinated in the pursuit of profit through privatization.

Time for a global social contract

The ILO reports on the labor market consequences with a potential loss of 25 million jobs, more than during the 2008 financial crisis. Working poverty is expected to increase significantly, affecting up to an additional 35 million individuals.

The world spends US$ 1.8 trillion on military expenditure every year and is scheduled to spend 1 trillion dollars on new nuclear weapons in the next 20 years.

Militarization is the wrong path for the world to take; it fuels tensions and raises the potential for war and conflict. It aggravates already heightened nuclear tensions.

World leaders must put disarmament and peace at the center of policy making and develop a new agenda for disarmament that includes banning nuclear weapons. We reiterate our call for governments to sign up to the TPNW treaty.

Disarmament is a major key to the great transformation of our economies, to ensure that human beings and not profit are most valued; economies in which ecological challenges will be solved and global social justice will be pursued.

With disarmament, the implementation of the SDGs, a global social contract, and a new global green peace deal, we can address challenges such as the coronavirus pandemic.

We are calling the world leaders, meeting at the United Nations General Assembly in September 2020, to act for a culture of peace. A peaceful path means that we need a global strategy, a global social contract, and global cooperation to ensure planet-wide support for people. This will be the human solidarity of the 21st century – for and with the people.

Our full statement is available on our website with translations in Spanish, French, German, Swedish, and Finish.