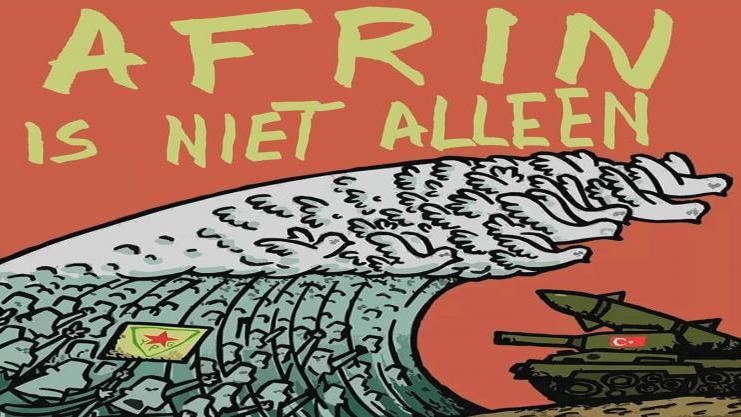 The Turkish AKP regime started a war on 20 January against Afrin, a predominantly Kurdish enclave in northern Syria. Several dozen organizations and individuals have signed a call to stop these hostilities immediately.

On 20 January, the Turkish AKP regime and its militias started a war against Afrin, an enclave in northern Syria with a democratic, multicultural and gender equal autonomous government. Afrin never posed a threat to Turkey. As a result of this aggression, dozens of civilians have already been killed and injured. Afrin was one of the more quiet places in northern Syria and a safe place for hundreds of thousands of refugees from other parts of the Syrian state.

The population of Afrin and its many refugees are at the mercy of the Turkish state and international and regional powers that are playing a perverse geopolitical game. And yet, it was because of the Syrian Democratic Forces and the Kurdish self-protection units, together with international support, that the so-called Islamic State was defeated in northern Syria. Now they are being left to their fate.

We ask Belgium, the EU and the international community to:

On Saturday, January 27, 2018, a public action will take place at 2 pm in front of Brussels Central Station, to protest against the military actions of the Turkish regime