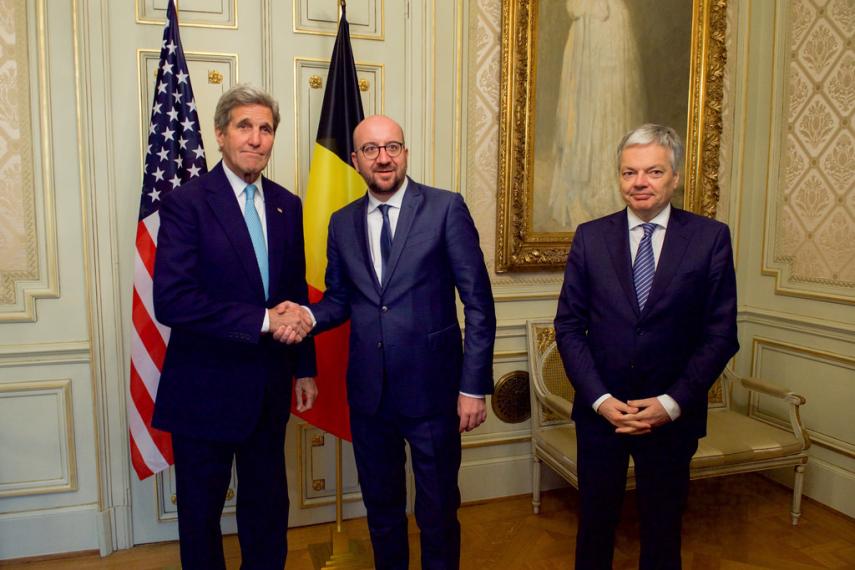 It took 541 days to put the new Belgian government together as a coalition with six parties. As peace movement we looked forward to see what the chapters in the government declaration on foreign affairs and defense would bring us. Except for some concrete elements – the modernization and downsizing of the army – this declaration excels in vagueness and shady commitments. This is the more striking when compared with the detailed decisions on the cultural French–Flemish problems. Even open contradictions can be found in this official document.

The new government will “firmly strive for a prohibition of weapon systems that have a random scope and/or make disproportionately many civilian casualties” (i.e. weapons of mass destruction). This sounds like a very strong stand which is to lead inevitably to a prohibition of nuclear weapons. But in this voluminous government agreement one looks in vain for any concrete commitment: the withdrawal of the US atomic bombs from the airbase Kleine Brogel – and from other places in Europe – is not explicitly mentioned . Yet, the removal of these weapons from the sovereign Belgian territory within a clear timescale would be the perfect application of the 'firm strive' for eliminating weapons of mass destruction, wouldn't it? Legislative initiatives for a prohibition of stockpiling these weapons are not announced either.

Our new government pleads to revitalize and respect the Non-proliferation Treaty and will work for international initiatives for further disarmament. But how this is to be brought in line with the NATO-strategy that Belgium fully subscribes, is not explained. The Alliance wants indeed its members to increase their military expenditures.

What meaning does the 'firm strive' against weapons of mass destruction have when NATO's New Strategic Concept (2010) is not questioned at all. The 2010 Strategic Concept states that “deterrence, based on an appropriate mix of nuclear and conventional capabilities, remains a core element” of NATO’s overall strategy.

Does the general commitment of this new government to respect the Non Proliferation Treaty also mean that Belgium will be a real active partner to help realize the Middle East nuclear weapon free zone, a single trace of which can not be found in the document?

Pleading for disarmament and supporting missile defense do not go together well, do they? Our country is contributing 3.5 million euro to NATO's missile shield which is in fact a dangerous (nuclear) polarization of international relations. But again, missile defense is not mentioned at all in this government agreement.

An other thorny issue for the peace movement concerns foreign military operations in which our country is participating. Since quite a while the Belgian army has been subject of a general reform precisely in function of participating in foreign operations. “The decisions on participation in foreign operations are of great political and social importance, so they demand bigger democratic legitimacy.” The peace movement has been asking for years now to be heard when the decision on foreign military operations is being prepared. So this approach sounds positive. We think here immediately of a parliamentary debate before the decision over whether or not to go, is put to vote, as is the case in some European countries. However, a 'bigger democratic legitimacy' means for the new government its commitment to “immediately inform the parliament and involve it in the follow up”. In other words nothing changes, is has always been like that. Business as usual while the army and its restructuring are fully instrumental for the “ army's global ambition of foreign operations”. Precisely this increasing presence on the international military scene demands a real democratic participation in a subject that can have important political repercussions. It represents quite some money, too : for the year 2011 costs in this field are estimated at 155 million euro.

In the chapter on foreign policy one sentence, one, is dedicated to the revolutions in the Arab world: we should pay “special attention”. On the Palestinian question this coalition agreement repeats the EU viewpoint not to accept changes to the 1967 borders that are not the outcome of negotiations. In itself this is positive. But what will be the Belgian answer to the Israeli policy of 'faits accomplis'? No answer. Why did the government not list concrete elements, e.g. ending the Gaza blockade,...?

This sector doesn't escape either of the empty commitments and the contradictions. “Belgian will do all it can to help realize the millennium goals on eradicating extreme poverty”. Some nuances are necessary, unfortunately: the budget of development cooperation will be frozen the next two years, which also means that the goal of dedicating 0.7% of GNP to development cannot be reached, as is wasn't in the last 40 years.

The empty prose and vagueness in the fields of interest for the peace movement, makes us highly suspicious towards this new government.