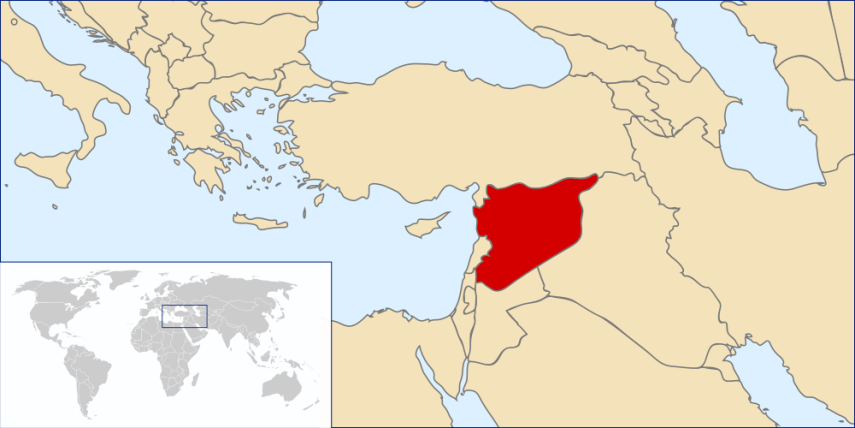 I travelled as a tourist to Syria, had no trouble to stroll around in Damascus and went on my own to Hama. After a short stay (third week of January 2012) I came home with a nuanced story over a complex situation.

My trip from Libanon was really easy. At the border I was immediately given a visa. In Damascus I didn't notice anything particular, life seemed to be easy going. I saw neither checkpoints nor any element that could make me think of a semi civil war. On my way to Malullah, a small town north of Damascus, I passed only one checkpoint.

In the rebel active cites Homs and Hama the situation is different. To my own astonishment I could enter Hama without problems or any control. On my arrival every thing seemed normal. Shops were open, the normal activity as I had witnessed during previous travels, street stalls having the normal attention of customers. Then all of a sudden the situation changed completely. In two areas along the centre of town I heard shooting, first with intervals but then quite heavy with machine gunfire and grenades for two hours. Hama turned into a ghost town, streets got empty at the very moment and I had to run away through all kinds of side streets with the help of local people. When heading for a bus stop I saw the Shabiha militia (paramilitary) from president Assad patrolling the streets. They left me unhindered. After the shooting normal life regained the town as if nothing had happened.

I talked to people from all sides. I met a member of Parliament, Ammar Badash of the Syrian Communist Party which is supporting the Bashir al-Assad government. I talked to youngsters in the streets, some of whom were active in the protest movement, others were more pro-regime. I discussed with a youth wing section of the governing Ba'ath Party. These youngster were rather fanatic, but very friendly (and curious). They were preparing a pro-regime rally in Mallulah (a small, mainly Christian town north of Damascus). In Beirut I met with opponents, amongst others a Syrian journalist and Yara Nseir, independent member of the Syrian National Council who painted me a nuanced image of the opposition. She herself spent 18 days in prison and to her own saying was well treated, probably because she belongs to the higher Christian middle class. There is no doubt over profound divisions in Syrian society, but is surely not (yet) a country in an open civil war. The president still enjoys the support of an important part of the population, which is key to understand why he still firmly holds position.

Assad has his own support base that often proves to be very fanatic and that is categorising all opponents as 'terrorists'. There are also quite a lot of people and groups of the population who support the government in a passive way. They don't want Assad to leave out of fear of what would come next: either chaos or a takeover by the Muslim Brotherhood. This is not so nice a perspective neither for the Alaouites (the Shia minority to which Assad belongs), the Christians, the Druze nor for a part of the Sunni middle class interested primarily in order and stability.

It has never been easy in Syria to talk openly about politics, people are suspicious and are definitely afraid. But out of what I could recollect I deduct that a part of the opposition really does have justified democratic and social demands which it wants to acquire in a peaceful way. Assad neglected for instance agriculture in favour of liberalisation and industrialisation, what resulted in serious problems in the countryside and in smaller towns. There is a high rate of unemployment, particularly amongst youngsters. And in the town of Deera students and teachers went on strike for better education. On the other hand there is armed resistance, not only from deserting soldiers but form all kinds of groups who get their arms out of Turkey or Jordan.

Opposition forces are firmly countered by repression, but not on the level that some media sometimes paint. Apart from the towns of Homs and Hama violence is concentrated in some suburbs of Damascus and mainly in smaller towns. Various witnesses confirm that peaceful protests were shot at, but also that some rebels are armed. I met a young man who was arrested during a manifestation in the Midnan district (Damascus) and released afterwards. One of his friends, however, was arrested two months earlier and is 'disappeared'. A female activist of the local coordination committees told me she was arrested for 18 days for the distribution of leaflets, but she was treated relatively well while in prison. Many others were/are beaten and kicked, what has lead to the death of some of them. A kind of censorship has always been present in Syria. In contradiction with earlier visits this time I could nowhere find foreign newspapers. On the other hand I could watch in the hotel the Al-Jazeera broadcasting without problems. Internet too seemed completely accessible, even the Syrian opposition websites, at least their English pages.

It is not always very clear who is shooting at whom, as it was for instance the case I experienced in Hama. There are military checkpoints, certainly in the problem areas, but I didn't witness at all a massive military power deployment of the national army. I didn't see any tank, not even in Hama or when I travelled along Homs with its many checkpoints. Of course tanks can be hidden.

Walking in Damascus, one thinks the idea of a military intervention absolutely absurd. To do what? To make the troubles escalate into an open war? Who pleads to intervene militarily in Syria, should do that as well for quite a lot of other countries. The Syrian National Council itself opposes such an evolution, although it is divided on the matter. Lately one has seen the Free Syrian Army and the Syrian National Council coming closer to each other. A further militarisation of the conflict is a highly probable scenario.