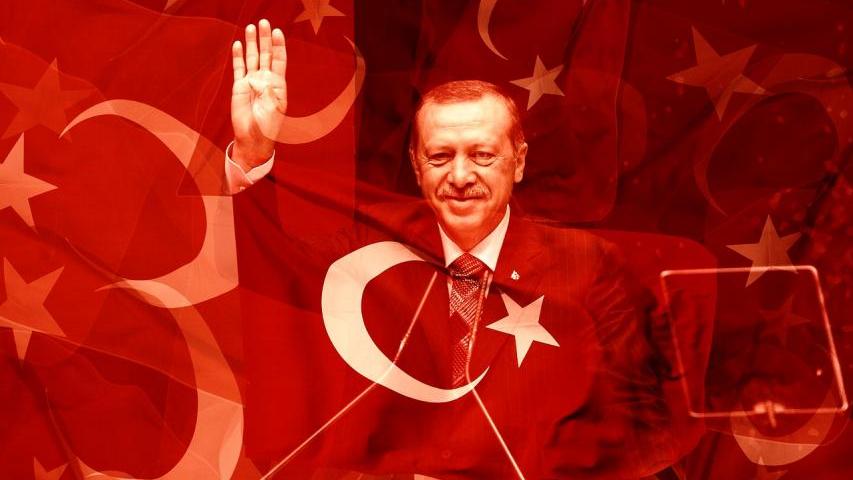 Erdoğan rules with an iron fist. Many opposing his authoritarian regime have been imprisoned or lost their jobs. His pan-turkism implies repression against the Kurdish people. Abroad, Erdogan is using military power to develop neo-Ottoman ambitions, at the expense of international law and Human rights

Thank you to give me the opportunity to speak at this important conference (*). I’m really sorry that I have to address you by a video statement.

When I joint the Musa Anter peace train in 1997, it was my first time in Bakur (Northern Kurdistan). Musa Anter was a writer and poet murdered in 1992 by Turkish counter guerrilla forces. He was one of the many victims of the military regime in charge that time. The Turkish army resorted to a scorched earth policy. Thousands of villages have been destroyed or evacuated causing millions of Internal Displaced persons. Turkey as an important NATO country was not stopped by its partners despite systematic and violent repression in the southeast of the country. On the contrary, it received arms and the US and the EU listed the PKK as a terrorist organization blocking political solutions and giving Ankara a pretext to continue its war policy, restricting fundamental freedoms and perpetrating massive human rights violations.

Though, the beginning of the Erdoğan era looked promising, with political, economic, and judicial reforms, soon he turned the page towards authoritarianism. After three rounds of negotiations – between 2008 and 2015 - he finally aborted a political solution for the Kurdish problem. After the failed coup of 15 July 2016, he started combining pan-nationalism and pan-Islamism with an extremely hostile rhetoric towards his opponents, mainly the movement of Fetullah Gülen and the Kurdish movement. Since, the repression in Turkey began reaching extraordinary proportions, with tens of thousands of people losing their jobs and many arrests, parliamentarians included. Hundreds of media outlets had to close down, with some of them turned into governmental mouthpieces. In 2015-2016 Erdoğan’s military apparatus put several Kurdish cities under curfew and destroyed some of them killing hundreds of people. He made clear that he’ll use military force to those who oppose him.

Under the AKP government, the Turkish state has gradually dissolved the separation of powers. Erdoğan combines legislative, judicial and executive power in a centralized nationalist power system that in its characteristics resembles in many ways to fascism.

On the foreign front, the war in Syria was a turning page for Erdoğan’s geostrategic ambitions. Using the war against Daesh in Northern Syria as a pretext the Turkish army and extremist Salafist militia invaded Syria for a first time in 2016 to block a successful liberation war led by the YPG/YPJ, the Kurdish military wing of the Autonomous Administration of North and East Syria. In January 2018 Erdoğan’s army and Syrian mercenaries invaded Afrin, up to then a peaceful Kurdish enclave in the west of northern Syria. This was repeated in October 2019 in the border area between Serekanye (Ras al Ayn) and Gire spi (Tel Abyad). Each time this has been followed by a repressive occupation policy and human rights abuses. The Independent International Commission of Inquiry on the Syrian Arab Republic published last summer a report on September 14, presenting its findings from investigations conducted in the first half of this year. In Afrin and the surrounding area, the report documents how the Turkish-backed Syrian National Army may have committed war crimes. According to the report, “multiple accounts indicate that the property of Kurdish owners was looted and appropriated by Syrian  National Army members in a coordinated manner”. Many civilians have been subjected to hostage-taking, cruel treatment and torture, and rape. In the same region, several civilians have been killed or wounded by large improvised explosive devices, as well as during shelling and rocket attacks. These forces known as the 'Syrian National Army' are composed of mercenaries from all kind of extremist Salafist tendencies. They are trained, armed, and paid by the Turkish government.

The Turkish meddling in Syria doesn’t stand on its own, nor is it only directed against the Kurdish liberation movement. It’s part of an ambitious neo-Ottoman project that must ensure Turkey's international influence and expansion. A few months after the uprising in Syria, Erdoğan already expressed his wish to create a buffer zone of 30 km throughout Northern Syria under Turkish military control. The occupation of those areas would match the map of the National Pact from 1920 to  create a greater Turkey as dreamed by Erdoğan. These invasions are clearly in breach with the UN Charter. But a resolution tabled on 11 October by the EU countries in the UN Security Council condemning the Turkish invasion was vetoed by the US and Russia. NATO Secretary General Stoltenberg only declared that Turkey is "at the forefront of the crisis and has legitimate security concerns” and added that “NATO has been informed by Turkish authorities about the ongoing operations in Northern Syria” asking Turkey only to "act with restraint". A few months later, in February 2020 Stoltenberg expressed NATO’s support for Turkey in Idlib declaring that “NATO continues to support Turkey with a range of measures, including by augmenting its air defences…”.

In June 2020, the Turkish military launched operations called “Claw-Tiger” and “Claw Eagle” in North Iraq using drones, airstrikes and other military operations announcing the establishment of three more new military bases as well. This means that Turkey currently has a total of 14 military bases in Iraq. The international community remains silent although Bagdad often condemned the Turkish military operations as a flagrant violation of Iraqi sovereignty that causes the suffering of civilians in the area. The Turkish military presence in Northern Iraq is consistent with the 1920 Pact. These military operations against the PKK are supported by Iran. Both countries established a tactical alliance against the Kurdish liberation movement, although they are rivals in Syria. Since the beginning of this year, Turkish airstrikes have attacked Kurdish fighters at the borderline between Iraq and Iran. At the same time, Iran has also increased attacks against Kurdish fighters in Iraq.

Turkey’s neo-Ottoman politics are not limited to the neighboring countries. In recent years, Turkey has expanded its military presence in many areas, from the Middle East to North Africa. In Libya, Turkey has intervened militarily and organized a counter-offensive on the side of the Government of National accord in Tripoli against Khalifa Haftar's Libyan National Army (LNA). In Somalia it opened the largest military base outside the country to train Somali soldiers. But more important is Somalia's strategic location at the Red Sea. Turkey also signed a military agreement with Ethiopia and Niger and plans to sign a similar agreement with Tchad. To facilitate his expansionistic regional strategy, Erdoğan has also built a military base in Qatar.

Turkey’s expansion in the eastern Mediterranean is a strategy called ‘Mavi Vatan’ or ‘Blue Homeland’ which is connected to Ankara’s meddling in Libya. In December 2019, the Turkish government signed an agreement with representatives of the Turkish-backed Tripoli government. The agreement is based on a mutually expansive maritime border between the two states causing tensions with France, Cyprus and Greece.

In July, following clashes between Azerbaijan and Armenia in Nagorno-Karabakh, Ankara joins the military side of Azerbaijan, starting a proxy battle in Nagorno Karabakh, by deploying Syrian mercenaries in the war, launching military exercises with the Azerbaijan army and training its officers. Turkey has become Azerbaijan’s third-largest supplier of weapons. Turkey’s arms sales to Azerbaijan have increased sixfold this year. Turkey and Azerbaijan have strong economic, military, cultural and linguistic ties. Erdoğan has invoked the saying that the countries are “one nation, two states”.

Turkey’s international policy is shaped by a new doctrine of pan-islamism and pan-Turkism and is deeply suspicious of multilateralism. It urges Turkey to act unilaterally when necessary. But, Erdoğan 's adventurism has come at huge economic and political cost. A cost that unfortunately the Turkish people will have to bear because as the Turkish president waged these battles to claim leadership of the Muslim world Turkey's economy has sunk. Turkey's currency, the Lira is in a bad shape. It hit a record low of 8.34 against the dollar end October 2020 (coming from 2.8 5 years ago). It has lost 26 per cent of its value this year. Inflation in Turkey reached 11.7 per cent last month. The Turkish central bank has raised its inflation forecast to 12.1 per cent for this year.

The pressure arising from Erdoğan’s foreign adventures is straining the country’s budget as the military by one estimate is eating up a quarter of government spending this year. A lot of that spending is going to Turkey’s defense industry to make the country independent of arms imports.

Erdoğan has spent heavily developing the Turkish military industry, whose turnover increased more than tenfold in less than two decades to $11 billion last year. It’s now the 14th-largest in the world. But it doesn’t have the technological depth to make Turkey militarily independent. It still relies on imported components, most notably the engines needed to power its biggest platforms. Nor is Turkey a major technological power needed to create modern weapon systems (it ranks 35th among 60 countries in the Bloomberg Innovation Index, behind Portugal, Romania or Greece (its arch enemy)). Moreover, Erdoğan’s repressive policies and cronyism have sparked a brain-drain, especially since the crackdown following the 2016 failed coup attempt.

In recent years, Erdoğan has resorted to an aggressive foreign policy, easily luring himself into an adventurous military policy at the expense of diplomacy. This puts him more and more on collision with countries in the Middle East, such as Egypt and the United Arab Emirates, but also with western countries such as France and Greece. A victory for Biden in the US presidential election could also lead to more tensions with the United States. The diplomatic and economic costs thus add up. The Covid-19 crisis makes things worse. As a result, Erdoğan’s popularity seems to decline in Turkey according to several opinion polls. It looks like Erdoğan’s Turkey is risking an imperial overstretch.

It’s likely that Turkey will be forced to review its foreign policy in a post- Erdoğan era to make it economically and politically sustainable. This also includes a political solution of the Kurdish question based on the full respect of Kurdish rights. Only then a prosperous and peaceful Turkey will be possible.

(*) This text has been used in a video statement at a webinar on November 1, 2020, organized by the International League of Peoples’ Struggle: ‘Stop isolation, fascism, and occupation! Free Öcalan! Free Kurdistan!’