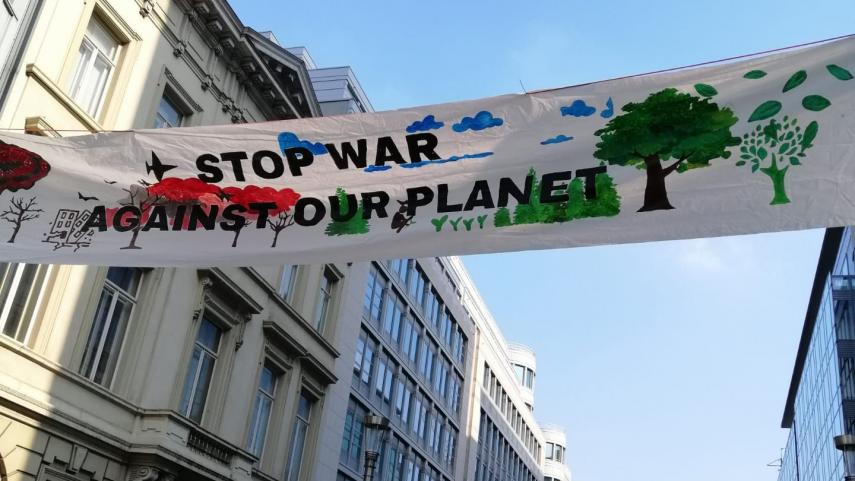 One set of issues that will not be addressed by governments at COP26 are those connected to militarism, war and prospects for peace. For example, in 2017 the US military alone emitted 59 million tons of greenhouse gasses: equivalent to the emissions of Sweden, Denmark or Portugal. The ‘carbon boot print’ of the world’s military is not up for discussion. We must put it on the agenda.

World military spending stands at $2 trillion: there is always enough money for war and armaments, no questions asked. Why is there plenty of money for destruction while pressing issues of survival such as climate and health are severely underfunded?

The World Bank estimates that there will be 200 million ‘climate refugees’ by 2050. Rather than hurrying to preserve nature and human life, militarised responses are being prepared: drones are taking to the skies, walls and fences erected. How can these oppressive responses be stopped and replaced with more constructive actions?

The nuclear-armed states are re-arming. There is a new nuclear arms race. Tensions between nuclear-armed states are high and the situation is very dangerous. Each new nuclear weapon costs billions of dollars – money that could be better spent preserving life on this planet. If a single nuclear weapon is detonated, hundreds of thousands of people will be killed within seconds. Millions of others will follow them to the grave in the hours and days that follow. A major nuclear war will plunge the planet into a ‘nuclear winter’, a severe and prolonged disruption of the climate that will exterminate much of whatever life remains. These risks are not up for discussion at COP26. They should be.

This is why the peace, anti-nuclear and climate movements need to unite to work towards a ‘Climate of Peace’. These issues cannot be meaningfully separated. Serious and lasting solutions to the threats humanity faces are urgently needed.

(Vrede vzw is an active member of Nuke Free Europe)