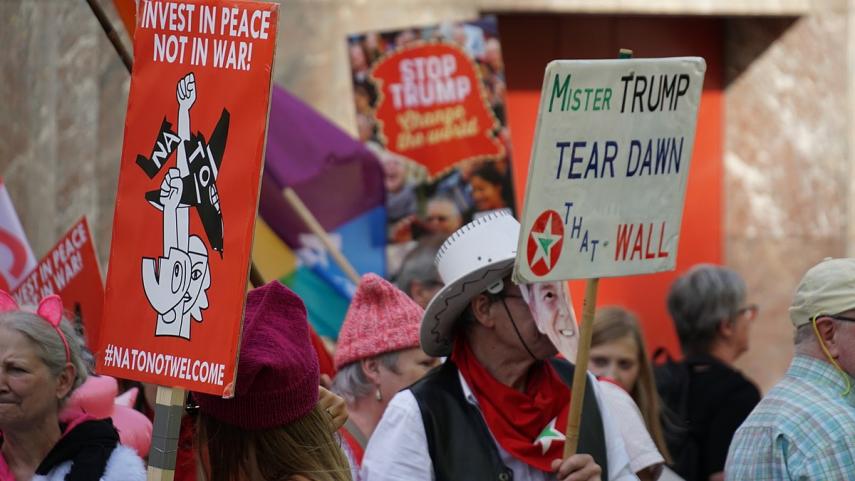 The May 25 NATO summit in Brussels ended low profile, politically it kept all its importance, though. Three C-words characterized this transatlantic gathering: cash, capabilities, contributions.

As expected, the central issue appeared to be money. US president Trump is convinced his European colleagues owe him because of their insufficient efforts to live by the NATO budget norms. At the 2014 summit in Wales NATO member states, indeed, did agree to try and increase their defense budget up to 2% of GDP. The Belgian government which accepted this proposal was at the time a dismissive one. Although the budget impact of such a promise is tremendous, the parliament in our country was not concerned. Actually Belgium spends 0.9% of GNP for defense, and its Strategic Defense Vision Paper foresees to increase this percentage up to 1.3 for the year 2030: an upsweep from 3.9 billion till 6.5 billion euro.

There are only four European NATO member states that answer the 2% standard. Such a planning is a pure negation of the European budget discipline, but still the allies stick to this norm. It openly laughs at the correspondingly required efforts of the population. Practically speaking the European members of NATO will have to upgrade their common defense budgets all together with approximately 130 billion euro.

In theory this 2% standard is just a 'target'. Washington wants however the norm to be realized, and is putting more pressure on the allies. At the Brussels meeting is was agreed that the member states will have to produce yearly national plans that show how they will fulfill their commitments. In an interview with the Flemish political weekly, Knack, NATO secretary-general Jens Stoltenberg let no doubt exist that this 2% norm is to be taken seriously. When he was asked whether he could accept the 1.3% planning for 2030 as mentioned in the Belgian Strategic Defense Vision, he just answered that our government did promise to reach the 2%. The target has become an effective norm.

In this NATO meeting president Trump performed quite arrogantly. In his own style he blamed the allies to be too shy on defense expenditures. There was some dissatisfaction uttered by some leaders like Angela Merkel, but nothing more than that. Indeed, under European leaders the idea of increased defense budgets is well established, with or without NATO. At the end of the summer of 2016 – before Donald Trump was elected – the European Commission presented a plan to invest from 2020 onwards, 500 million euro tax money in military research and development. Up to now, military research has been excluded from the European research programmes. A common European defense fund will be established with yearly a 5 billion euro budget for common development and purchase of military equipment. A higher military budget and better equipped armies will help to counter the threats, is heard in these circles. But how serious is this, when big amounts of European weaponry are exported to conflict regions where the threats are said to be coming from? Such policy is mainly good for the European defense industry, which was surely involved when the most import documents on security and defense were written. In short, militarization in Europe is ongoing, with or without NATO.

The 130 billion needed for the defense plans can only be produced with heavy cuts in social security. The Europe of social crises and high poverty figures will have to pay for destabilizing interventions and wars abroad, while military industry will count its benefits.

At the counter summit of the peace movement more than 200 international participants criticized the growing military expenditures. They discussed strategies to stop this dangerous process. The challenges are huge, but resistance can only be successful when it can count with a broad front of social movements. It is in everyone's interest that the means go to social security, international solidarity or the struggle against poverty and climate change in stead of to militarization. That is where the real threats ly on our planet. Those 130 billions would be very helpful.