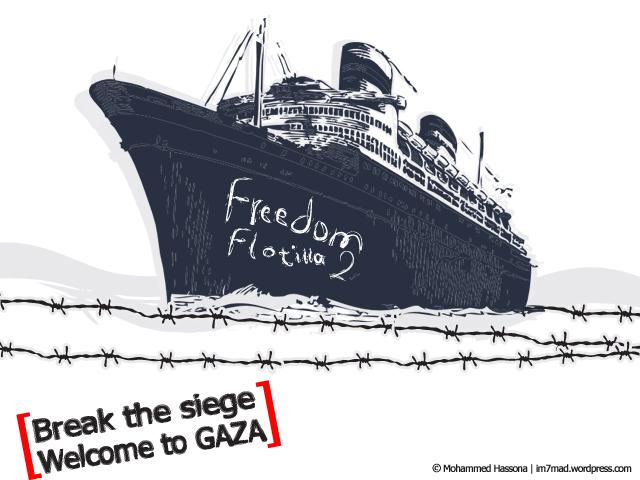 In recent years Israel has been confronted with a new phenomenon : a very active international solidarity movement defending the rights of the Palestinians. The international BDS movement – boycott, divestment, sanctions - feels inspired by the campaigns against then apartheid South Africa. This non violent movement causes quite some worries for the occupation force as for instance a lot of artists joined the appeal not to perform in Israel. Moreover certain companies stopped under public pressure their investments in colonisation projects. A growing number of consumers refuses to buy Israeli products in the supermarkets. Actions become ever more creative: hundreds of peace activists from all over Europe organised a “fly-in” to Ben Gurion airport to go and claim the right to travel into Gaza.

The vigorous reaction of Israel and its allies shows how sensitive the international campaigns are. The Zionist government sees these as a serious damage to its image and its international relations, although its very policy is actually feeding the actions. The brutal army attack against the first Gaza flotilla in May 2010 which caused nine deaths, is very illustrative in this sense. An inquiry of the UN Human Rights Council was particularly hard for the Israeli army: it talked about summary executions, inhuman treatment and other serious violations of international law. It is an understatement to say that it damaged Israel's diplomatic position. A conflict broke out with Turkey and through the international pressure the embargo against Gaza had to be softened. When a second Gaza flotilla was announced Israel showed to be prepared. Supported by Washington it pressured national governments in order to discourage the departure of the boats. Two were sabotaged. UN secretary general Ban Ki Moon got things wrong by declaring that the legal channels were to be used for the assistance, i.e. via the Israeli controlled channels. A large scale disinformation campaign painted the participants of the 'Freedom flotilla II' as arms trafficking terrorists who searched for a violent confrontation or only wanted to cause serious damage to Israel. In reports, photos and films Gaza was shown as a paradise on earth, with luxury hotels and flourishing marketplaces, although we know from so many recognised reports that the blockade pushed most of the Gaza people economically to the edge.

Greece played a particular role by prohibiting the Gaza flotilla-boats to leave the Greek ports. Greece is a nation under financial trusteeship and in that way due to follow the pro-Israel policy of so many of its patrons. But there is more. When the relations with Turkey went wrong, Israel turned to Greece. At the same time Athens thought it interesting to be able to replace Turkey. Indeed, Greece used to have good relations with the Arabic world and critical ones towards Israel (only in 1990 full diplomatic relations were installed between the two countries) but changed course in 2010. Few months after the incident with the first Gaza flotilla prime minister Papandreou visited Israel, a first visit in 18 years. Shortly afterwards premier Netanyahu paid Athens a return visit and signed an agreement on military cooperation, allowing Israel - with its small airspace - to use Greece for its military training flights. October 2010 both countries realised their first common air force manoeuvres. In December 2010 Israeli defence minister, Vilnai, signed lucrative arms deals in Athens for IMI and Rafael, two Israeli state owned arms companies. Avigdor Lieberman, the extreme right minister of foreign affairs, went in January 2011 to Athens for the installation of a joint Strategic Security Cooperation Committee in order to combat terrorism. It seems likely that the Greek actions against the second Gaza flotilla were prepared by this committee.

Israel can count on a well functioning lobby apparatus from Washington to Brussels to create goodwill for its colonisation and blockade policy. Its success is an absolute disgrace. Where the international community, including the EU, should attack the blockade as a clear form of collective punishment contrary to international law (the fourth Geneva Convention) it supports the Israeli occupation policy.

Via Greece, the blockade against Gaza has now reached the European frontiers.