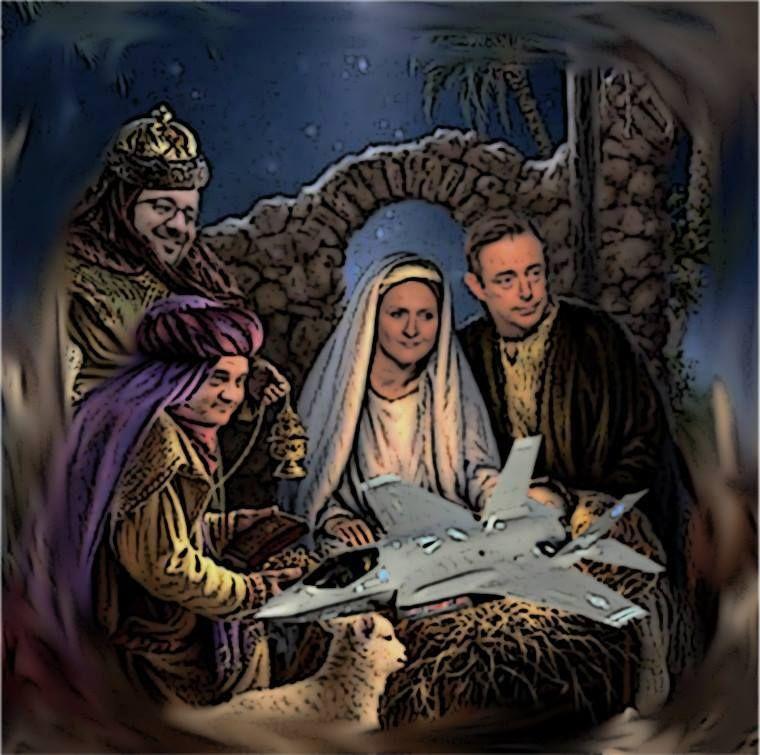 In the Christmas period of last year the Belgian federal government decided to invest 9,2 billion Euro in Defense by 2030. This ambitious en in times of austerity totally unrealistic plan should come into force by the beginning of the next legislative period.

The 9,2 billion Euro are destined for all components of the army: navy, land and air forces, but also (cyber) intelligence. “The past decades the Defense budget has been decreasing continuously. Today we have a historic turning point. We are investing again in our armed forces”, said the minister of Defense Steven Vandeput (N-VA) after the presentation of the 'Christmas Agreement'. That the army has been subjected to cuts for 'decades' is simply untrue. It is true that the stagnant Defense budgets haven't been indexed for a few years, which means that the army is confronted in real terms with a shrinking budget and proportionally rising costs for personnel, equipment and operations. Only since 2014 and the installation of the current austerity government the army has been confronted with actual cuts, just like any other sector in society. The Defense budget for 2015 amounted to 2,5 billion Euro, pensions (which are a heavy cost in Belgium) not included. With the launch of 'Horizon 2030', the new strategic plan for Defense, this trend would be turned around completely starting from the next legislative period in 2019. According to this plan the Defense budget should double by 2030.

From 2019 on 800 million Euro a year will be earmarked for buying new military equipment. A big part of that money should go to the already decided purchase of 34 new fighter jets – the first specimens should be delivered by 2023 and 2028. The government has earmarked 3,5 billion Euro for this, or 105 million Euro per fighter jet. Not one of the five types of planes that are eligible, is available for this price and certainly not the model that the army favors: the F-35. Based on the amounts put forth by the Dutch Chamber of Accounts for the purchase of 37 F-35's, the price tag will more likely be 120 million to 150 million per unit and that is without counting any maintenance costs. Other gluttons in Horizon 2030 are new surveillance drones (550 million Euro), a tanker plane and strategic transport aircrafts (300 million), artillery and other logistics for the land component (1,9 billion), new frigates and frigate helicopters (more than 1 billion), 6 new minesweepers (932 million Euro), etc. Completely surprising are the funds that are foreseen for the 'possible' acquisition of an utterly needless patriot missile defense system: 588 million Euro. This wish list doesn't seem very realistic.

Completely surprising are the funds that are foreseen for the 'possible' acquisition of an utterly needless patriot missile defense system: 588 million Euro

In order to be able to invest in military equipment Vandeput wants to cut down the workforce drastically. He also wants to rejuvenate the staff. “Within our assignment there is a shift to support operations and conflict prevention... A government doesn't have to want to do everything, but has to focus on its core tasks and execute those with responsibility, efficiently and cost consciously”, according to the Minister. That is wisely remarked but the question is: what are these core tasks? First and foremost it is guaranteeing the collective safety or security of the citizens.

It is clear that the reforms of Vandeput are aimed at increasing the operational capacity for missions abroad. With this orientation Vandeput explicitly wants to sign on to the interventionist NATO policy. Unfortunately the successive military interventions of this organization have not contributed to the collective safety. On the contrary, countries that have intervened in a NATO context in Afghanistan, Iraq and/or Libya have made themselves a target for terrorists, who specifically refer to these interventions as their motivation. Furthermore, on the site these NATO missions also proved disastrous in humanitarian terms. The set objectives -democracy and stability- are far from realized in Afghanistan, Iraq and Libya.

NATO is an organization that wants to overcome all security challenges with military means. However most of these challenges are not military by nature (social and economic inequality, the effects of climate change, unfair trade relations, discrimination, …), thus they require a much more diverse set of instruments.

NATO consciously clings to its nuclear weapons – weapons of mass destruction that embody the opposite of safety and security.

NATO itself also contributes to global insecurity by pursuing an aggressive confrontation policy towards Russia (eg. the current military buildup along the Russian borders). Moreover NATO consciously clings to its nuclear deterrence and nuclear weapons – weapons of mass destruction that embody the opposite of safety. NATO also forces its member states to inflate their Defense budgets to 2% of their GDP's. In Belgium that would mean a doubling of the current Defense budget (as foreseen in Horizon 2030). But collective security doesn't benefit from more military spending, only arms manufacturers. Lastly NATO undermines the possibility of autonomous policy choices on Foreign Policy and Defense for member states and undercuts the role of less narrow-mindedsecurity institutions as the United Nations (that has an international scope) and the Organization for Security and Co-operation in Europe.