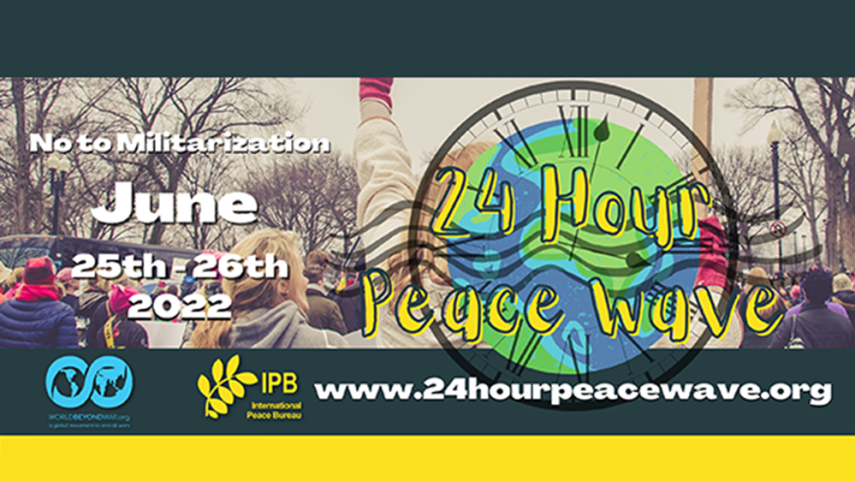 24 Hour Peace Wave: No to Militarization – Yes to Cooperation
Evenement

The G7 will be meeting near Munich June 26-28. NATO will be meeting in Madrid on June 28-30. We will speak up for peace and cooperation, the scaling back and dismantling of military alliances, the disarmament of governments, and the democratization and strengthening of international institutions of nonviolent cooperation and the rule of law. It is beyond time to address the unavoidable crises of nuclear risk, climate collapse, hunger, and homelessness, rather than manufacturing crises for the benefit of weapons dealers.

We are holding a non-stop 24-hour rolling rally live streaming on a Zoom channel moving west around the Earth from 2 p.m. in England on June 25 to 4 p.m. in Ukraine on June 26. There will be video from protests, demonstrations, vigils, teach-ins, and speakers at their desks. There will be music and art.

A detailed agenda can be found below this page (12 parts). More details are being updated all the time. You can of course drop in and out at any time during the 24 hours.

Sign up here to get the Zoom link and more info.

Livestream of London protest, Stop the War in Ukraine – No to NATO – Russian Troops Out: The protest in London is from 2-3:30pm BST at the Ministry of “Defence” (opposite Downing Street). Presentations and music from Western Sahara. Check-in at the Faslane peace camp and TPNW conference updates from Scotland, as well as a performance from the Raised Voices Choir – an anti-militarist choir will be performing!

Speakers from Argentina, Peru, Chile and Ecuador, as well as music and poetry throughout Latin America.

One-hour event at The High Line in New York City - including a drone installation and participants from Veterans For Peace, the Raging Grannies NYC, Catholic Worker, the Rising Together Guerilla Theater, and many others. This will be followed by the Hamilton Coalition to Stop the War, then a demonstration on Long Island with vigilers with kites bearing messages and music.

Afterwards, the session moves to Asheville, North Carolina, where activists are opposing construction of a new Pratt-Whitney/Raytheon facility. The event will be from 2-3 pm ET, at Pack Square, corner of Biltmore and Patton.

Finally will be Dave Lippman, songwriter and performer, and Canadian author and activist Yves Engler, plus a video of Noam Chomsky.

Among the speakers will be:

Angelo Cardona, Colombian Activist & IPB councilmember will speak on the Colombian election & its impact on peace in the country

Moderated by Leo Gabriel, Prague Spring II Network – it will be an interview / round-table exchange.

Ground Zero Center for Nonviolent Action presents a live event including performances by indigenous peoples in the US, discussion of the risks of nuclear weapons and drones, court testimony of protesters against nuclear weapons, and more.

Includes a collective poem to cancel the RIMPAC war games in the pacific, video and speakers on the bombing of Hawai'i, the poisoning of the water supply by the US military, and more.

Slideshows, videos, interviews, music and more of protest actions in New Zealand and Australia. Including anti-RIMPAC and No to NATO actions, as well as actions in support of ministries of peace.

Live Japanese protests in support of joining the Treaty on the Prohibition of Nuclear Weapons, and to stop nuclear sharing and changes to the constitution. Korean presentations on RIMPAC, Korea's engagement with NATO and the expansion of the military alliance in Asia, and for the end of the Korean war.

Songs, poetry, dance, and visual art as well as speeches and solidarity actions from across the Asia Pacific region.

Artistic and educational presentations from Afghanistan, Bangladesh, India, Nepal, Pakistan, and Sri Lanka, as well as segments on the economics of peace, the South Asian Ensemble, and Colours of Peace.

Speeches on disarmament for development, no to NATO, and common security, accompanied by live and recorded video from Madrid, Ramstein Airbase, Sinjajevina, and the G7 summit. Video from Noam Chomsky.

Panel discussion with participants from Finland and Lebanon as well as recorded statements from Iran, Kenya, and Ukraine.